Big Change:
The end of Five-Year Plans: All you need to know
No other participatory sport in recent history has experienced anything quite like long-distance running. Running, and especially marathon running, is one of the fastest growing sports in the world. It’s also becoming one of its most popular events for companies to sponsor and participate in. The cultural and market implications of the marathon’s surge in popularity is apparent in the growing number of runners and running clubs in countries like India, which is contributing heavily to sales of sportswear brands. While the marathon has its dream run, we take a quick look at its evolution as a sport and business.

Partners Bengaluru Marathon (since its first edition in 2014) and the New Delhi Marathon, the maiden run was earlier this year. Has gained significant market share in running groups in Bangalore. Number of runners at the Bangalore Marathon has almost doubled in past three years. The company is expecting around 10,000 long distance (8,000 half marathoners and 2,000 full marathoners) runners this year.

Activities: Connects running enthusiasts worldwide; training runs before marathons; strong group of runners associated with the brand across country; meet and greet sessions to educate runners before the run; promotional runs where amateurs can interact with experienced athletes; ‘Adidas Runners’ program, an outreach program that helps a runner meet his/her individual goals; mobile apps – ‘Train & Run’ as well as Runtastic engage several million globally on all aspects of running, training, FAQs, pacing plans as well as custom plans to reach one’s goals. Emphasis is on personalising every offer – be it product or information, to every runner.

“It’s a year round business, demand has grown due to people embracing running as an activity, events are a byproduct as they give people a finite and time bound goal to train for. Typically serious runners start preparing for the marathon almost 6 months before the run is scheduled and hence it’s a year round thing for us and there is no significant difference in sales during the marathon season.”

A road race truly is a mass participation sport that a city owns. Initially, participants ran for a whole host of reasons. While the reasons were myriad and unique the least common denominator was running. Over a period of time, these enthusiastic early adopters became key opinion leaders, coaches and accomplished runners who started taking on timing challenges and thus was born the ‘Working Athlete’ – who was an athlete in training at 5:00 am and a white collared employee at 9 am. 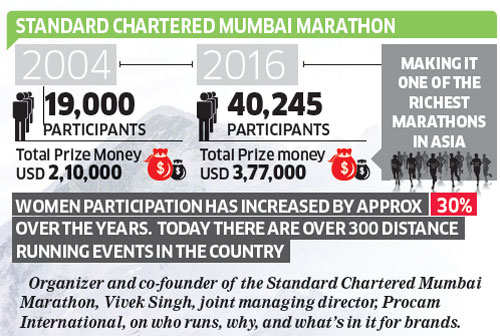 Engaging at Point of Sweat

India is now seeing a new sporting platform which gives far deeper returns, however, it needs to be played differently. Earlier the only options available to marketers were spectator sport and the engagement was about visibility, branding, television buys, cost per thousand.... However, the dynamics have now changed. Participative sport has proponents who are pounding the pavement for 10 months of the year. Today the key boardroom discussion amongst marketers is how do you engage at the ‘point of sweat’. To engage with runners, brands today create ‘essential’ differentiators for the working athlete by delivering to them when they are in the zone. The connect thus achieved is far stronger, and today categories like nutrition, recovery, insurance, restoration are being serviced by brands.

Founded in March 2011, the “Happiest 5k on the Planet” is essentially the un-holi union of the marathon and paint. In fact, it’s the original paint race. Although some might still argue that running away from a mob hell-bent on playing holi with you, generally without your consent, is the original paint race. At IBM Amplify, an annual conference for marketing technology, Kiley Newbold, VP, marketing, The Color Run said: “We are living in the age of the experiential customer. They want experiences more than they want things. We give them social capital, moments to share.” In 2015, The Color Run hosted 225 events in 35+ countries. 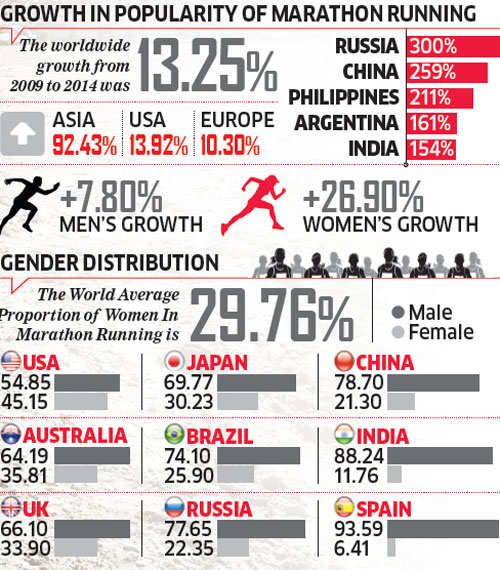 Stay on top of business news with The Economic Times App. Download it Now!