"Tata Steel UK has received confirmation from the pensions regulator that it has approved a regulated apportionment arrangement in respect of BSPS," Tata Steel said in a statement here.

ET Bureau|
Sep 12, 2017, 12.03 AM IST
0Comments
KOLKATA: Monday marked the final separation of the British Steel Pension Scheme (BSPS) from Tata Steel UK, with the latter receiving all approvals for its Regulated Apportionment Agreement (RAA) from the pensions regulator.

As part of the RAA, Tatas had to make a payment of £550 million and offer a 33% stake in Tata Steel UK to BSPS Trustees. It is significant since it frees Tata Steel UK and its affiliate companies from £15 billion of pension liabilities and brightens up the prospects for the future of Tata group's steel business in the UK , including a possible merger with Thyssenkrupp.

Net financial impact of RAA, including payment of the agreed amount, would be reflected in the Q2 FY18 company financials. The pension deal is fundamentally important and strategically relevant for Tata Steel UK. Tata Steel and Thyssenkrupp have been in merger talks for nearly a year now and the £15 billion pension scheme was believed to be a major stumbling block because the German company was opposed to taking on £15 billion ($19.82 billion) in UK pension liabilities.

It is widely believed that Monday’s development will clear much of the hurdles along Tata Steel’s way in planning an enduring future in UK, including the potential merger with Thyssenkrupp. Last month when the Pensions Regulator approved the deal allowing 28 days for any objections, ET caught up with Koushik Chatterjee, Group Executive Director (Finance), who has been largely responsible from the Tata side for negotiating the deal and asked him whether it will help in the merger with Thyssenkrupp. 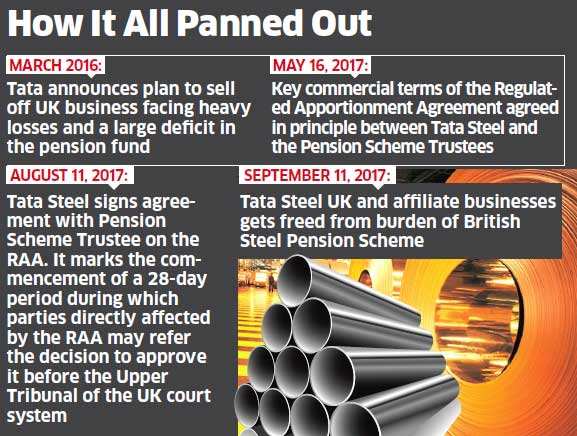 Without referring to specifics Chatterjee had highlighted the importance of the deal saying: “It is a priority for us. It aims at reducing the structural volatility of a large pension fund associated with the business. While it is not related to the future it will help the UK business in future.”

Apart from the £550 million payment, the 33% stake in Tata Steel UK was issued to BSPS Trustees under a shareholder agreement, is a regulatory compliance under the RAA framework involving Trustees and Pension Protection Fund. As Chatterjee had then explained: “It is referred to as the 'anti-embarassment' stake. We acted purely on the basis of published principles of the Regulator.”

Tata Steel employs about 6,250 people in Wales, including 3,500 in Port Talbot steelworks. The latter’s fate and those of the Tata group businesses in the UK was thrown into uncertainty more than a year ago when they announced a plan to sell the British assets following heavy losses.

The pension scheme posed a particularly large burden. Without a deal on the pension scheme, Tata Steel UK had warned it could face insolvency due to the size of the fund's deficit.
Read more on
british steel pension scheme
tata steel
tata steel uk
thyssenkrupp
Comments
Add Your Comments
Commenting feature is disabled in your country/region.