How Liberty Media is making Formula One relevant to digital audiences

By
Kunal Talgeri
, ET Bureau|
Updated: Nov 26, 2017, 01.25 AM IST
0Comments
Nine weeks before Lewis Hamilton won his fourth Formula One (F1) world championship, he was starting fifth on the race grid at the Singapore Grand Prix. The Mercedes GP driver had a slender lead in the driver’s championship. His arch-rival Sebastian Vettel was starting at pole position in a Ferrari.

It began raining on that September evening. Neither driver knew how the fate of the 2017 championship rested in what would happen in the opening few seconds. The lights winked go. The 20 cars were off. But at the first turn, three cars — including both the Ferraris — were involved in a crash. Vettel was out of the race. The Marina Bay night race was Hamilton’s thereafter. He duly won.

Even as the Singapore Grand Prix transpired over 55 laps that night, broadcasters kept rewinding to that opening lap — the mayhem at the first turn. As did fans globally on smartphones and digital TVs to figure out which of the three drivers caused the crash.“People love to see the cars. At the end of the day, the sport is about great action on the track,” Chase Carey, chairman and chief executive of the Formula One Group, had said in Singapore, earlier that evening. “It’s about a television screen today. We now want to use the capabilities that exist because of technology platforms to bring the fans as close to the sport as possible.” 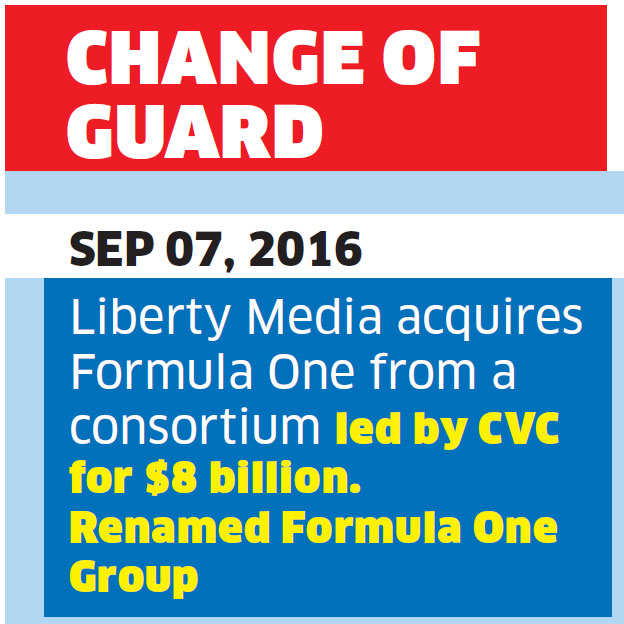 According to a Formula One Group investor presentation in May, the sport attracted 270 million digital video views in 2016 but digital contributes to less than 1% of total F1 revenue. Legendary F1 commentator Steve Slater concurred on that September evening, saying motorsports is at a point where it has to rise beyond its television roots — which made it a $2 billion sport — and embrace the digital age. Otherwise, it could become irrelevant.

Carey is cognizant of that. He became CEO after a controversial $8 billion takeover in late 2016, by Liberty Media from private equity group CVC. The tug of war ended the four-decade reign of Bernie Ecclestone, who had blazed a trail for Formula One into the TV age. 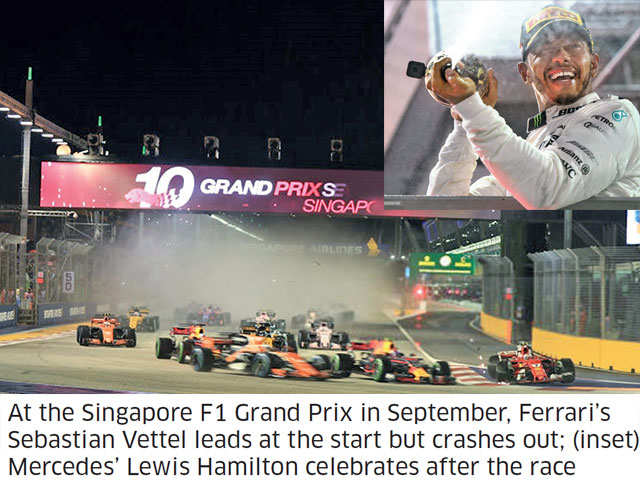 Carey wants to take it to a heterogeneous audience without losing the hardcore fan base. “While the pinnacle of F1 is the live experience, millennials want to access the sport in the ways they want,” he says, aware that on-demand entertainment like Netflix is fragmenting motorsports viewership.

The trick is to get ’em closer to the sport than ever. Not just new mics, new cameras and the sounds. It will be about bringing a richer and neater experience to the fans who want that kind of engagement. An over-the-top (OTT) media experience, which means making F1 device agnostic and richer in content.

“Liberty Media has smartly started pushing the digital media space,” says Vicky Chandhok, who was president of the Federation of Motorsports Clubs of India when the Buddh International Circuit hosted Formula One between 2011 and 2013. “They have recognised that the future is going to be on the smartphone.” Ecclestone didn’t want to be in that space and had overinvested in advanced TV production technologies. “He transformed F1 by spending a fortune on TV production. He set the standards,” says Chandhok. Carey’s ascent marks a change of era for F1. 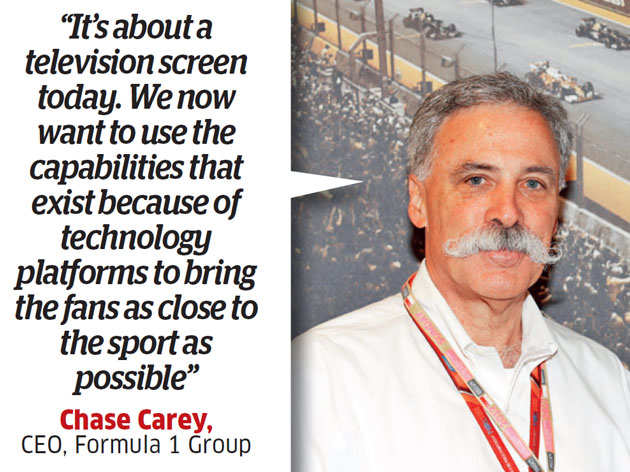 Inside Track
Unlike most sports played between two sides, Formula One throws up myriad content possibilities because it involves 10 teams of two drivers each. There are 20 players on track. So, the OTT media possibilities are immense if fans want to follow their respective team or driver, each of whom have a social media following. F1 clocked 3.5 billion social media impressions last year.

In Singapore, there were two 360º cameras at the Marina Bay Street Circuit — in the trackside and paddock — for viewers at home to experience these exclusive areas through a virtual reality (VR) environment on the official F1 app. So, when a driver pulls into the pits for a tyre change, fans could complement the TV action with a 360º view of what’s happening in the pit lane in real time.

Picture a car that pulls into a lane for a pit stop. The crew members lift the front and rear for tyre changes with a jack, as four gunners loosen the nuts of each of the four wheels — and replace them with fresh tyres. The car is then restored on the floor before the driver pulls away. All this pit-stop action in a few seconds, on which hinge various race positions. 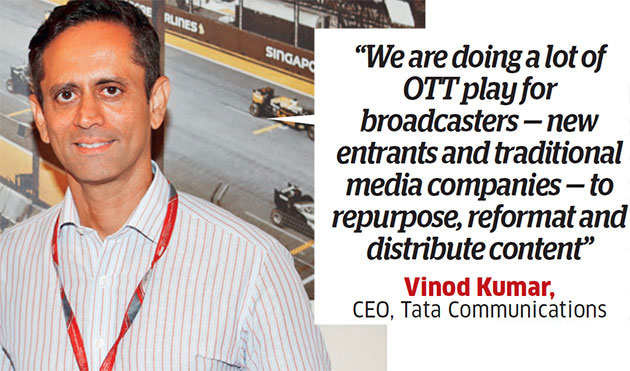 The Formula One Group is toying with proofs of concept of what the 360º camera can do for perspectives of overtaking manoeuvres, and even crashes to enable fans to get that close to the action.

“It is a sport that is rich in data and information,” says Carey. “How do we take that vast information that a team has, and take it to the fans?” He is referring to information like pit lane developments, checking driver positions on track and lap times.

“We are doing a lot of OTT play for broadcasters — new entrants and traditional media companies — to repurpose, reformat and distribute content,” says Vinod Kumar, CEO of the Rs 17,980 crore Tata Communications, which is the connectivity and hosting partner to Formula One Group.

The alliance enters its sixth year in 2018. So Tata Communications knows a thing or two about live action.

Six days before a race, a team of its IT specialists arrive on the track to ensure the connectivity is up and running. With three days to go, preconfigured walls of the technical centre are slotted into place. F1 gets plugged into the network and sets up a talkback system to connect the business and technical ends. A day later, testing begins for the throughput, latency and resilience with F1 management’s IT specialists.

One day before the race weekend, all systems go live. Governing body FIA (Federation Internationale de l’Automobile) then carries out tests to simulate race situations. And then it’s over to the races. “Technology is at the heart of the opportunity to reimagine Formula One, take it to new and different audiences across different formats,” Kumar says.

Mehul Kapadia, vice president (marketing) for Tata Communications, says OTT will be relevant to each of four user-stacks. The first are spectators coming to the race track. Two, people who are watching it on large screens at home. Three, people using mobile devices; and four, millennials with micro-experiences and on demand. “Everybody has an opportunity to experience it uniquely,” says Kapadia, who heads the F1 business for Tata Communications. Apart from delivering the content worldwide, Tata Communications is working with seven Formula One teams, including Mercedes, on remote operations and technical front.

“The racing teams can send a limited number of technical people (up to 65 persons) to each track,” says Kapadia, adding that larger teams sit at the race team headquarters to process the data from the track over a racing weekend. “They run race simulation for pit strategy, sitting remotely.”

So data like track temperatures, lap timings and video feeds of the garage from the Mercedes pit wall are transmitted in real time to its headquarters in Brackley, UK. The remote team analyses this and contributes to vital decisions live on race day. “We have made a conscious effort to build the fibre capability at the race track,” Kapadia says. This enables the data to be transported from the race venue to where it needs to be stored and processed.

“The solutions we are developing are geared to be very dynamic,” says Tri Pham, chief strategy officer of Tata Communications. “On practice days, these guys are constantly adjusting the cars, engines for each race. So the amount of data they collect to make those decisions is huge.” 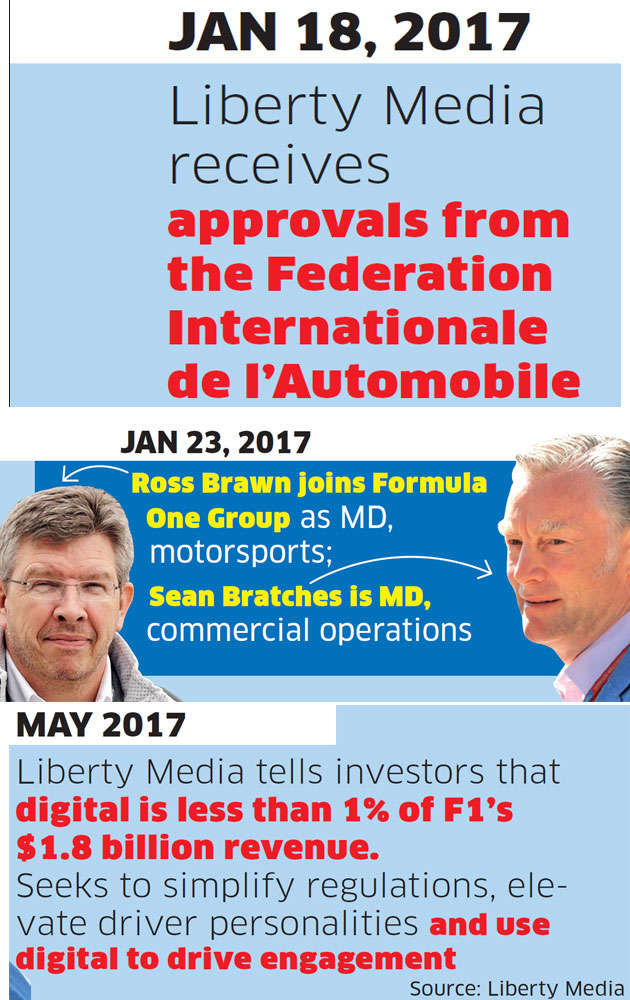 New World
Formula One is a sport steeped in history. The Formula One Group owns more than 55,000 hours of library content. Most of its legacy is rooted in Europe, where the sport thrived from the 1950s. In the 21st century the future was posited to be Asia — and the US, immersed in the motorsports legacy of the Indianapolis 500.

However, barring Suzuka in Japan, spectators on the race track have been on the decline. There are murmurs of Cambodia and Vietnam being added to the F1 circuit. Malaysia, the hope at the turn of the century, was dependant on government support to absorb the hosting rights. It now ceases to be a host venue. While Italy, Britain and Brazil (above 90,000) still attract large spectators to the tracks, Formula One Group has to reinvigorate following in other countries.

Until a decade ago, promoters could afford the rights fee because of government support, which sought to leverage the tourist interest in the sport. That has changed as more economies have come under strain.

Last year, Formula One Group derived 36% revenue from race promotions, 33% from broadcasting partnerships and pay TV, 15% from advertising and sponsorship, and the rest from on-track services like the race paddock club and logistics services to the teams.

The F1 following, estimated to be 390 million television viewers, needs new blood. This poses hard questions about a sport renowned for its geographic range and history, dating back to the 1950s. Carey is clear: “When we have a sport that has a rich history, we have to respect that. But don’t let history be a trap, which can prevent you from continuing to energise and innovate.”

A week after Liberty Media announced Carey as CEO in January this year, Ross Brawn was appointed managing director of Formula 1 Motorsports. Renowned for being the brains behind the world titles with Ferrari in the Michael Schumacher era, Brawn also ran a championship-winning team in 2009 with the Brawn GP-Honda team.

“Carey seems to have a control on the commercial aspects of the sport and spectacle, and they have the advantage of having Brawn in the team,” Chandhok says. “That’s going to be interesting because Brawn will maintain the ethos of the sport, even as F1 tries something audacious in new markets like US and China.”

Ecclestone was shrewd. “It was his business and passion,” Chandhok notes. “He started the television production studio, referred even now as ‘The Village’. Bernie decided that a single feed will go to all broadcast channels. I am sure Liberty Media will get there in the digital mission. Right now, they are following a wider process of getting everyone on board,” he explains.

The digital drive will be vital for valuation, stuck at $8 billion for nearly a decade, and to draw advertising dollars in the virtual reality era. “Sponsorships will continue to be a big source, as we increasingly get connected to fans,” says Carey.

“The shape and form of advertising will evolve into something different from what it has been in traditional television. Sponsors will remain a big part of this sport.”

Formula one Japanese GP: In the shadow of Typhoon Hagibis

Formula One Brazilian Grand Prix: Looking to end on a high

Lewis Hamilton: From a cash-strapped young racer to global Formula One superstar

Formula One: Charles Leclerc overtakes Sebastian Vettel to be Ferrari’s no. 1