Kan Khajura Tesan or "centipede station", a programme by Hindustan Unilever to provide radio over mobile to the media dark parts of North India has scored a massive three gold trophies.

By
Delshad Irani
, ET Bureau|
Updated: Jun 18, 2014, 08.36 AM IST
0Comments
CANNES: It's been a long time coming but India's finally scored the campaign equivalent of a killer app. Kan Khajura Tesan or "centipede station", a programme by Hindustan Unilever to provide radio over mobile to the media dark parts of North India has scored a massive three gold trophies; two in Media for PHD and one in Mobile for Lowe and Partners Worldwide. Although Lowe Lintas is the creative agency behind the work, the agency is absent at award shows because of its chairman R Balki's famous no awards policy. However, the creative council of Lowe Worldwide headed by Jose Miguel Sokoloff picked the pathbreaking work to throw into the toughest ad competition in the world.

Today's edition of Brand Equity carries a detailed article on this rural outreach initiative - which predicted it could win at Cannes. 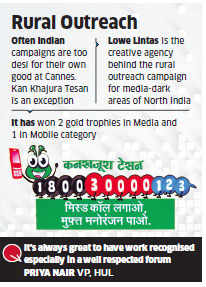 Reacting to the news, Priya Nair, vice-president at Hindustan Unilever says, "It's always great to have work recognised especially in a well respected forum." Long regarded as a tough formula-driven marketer, Unilever has over the last decade turned its reputation around and is now regarded as a client encouraging of creativity. However as Nair clarifies, "Obviously, we are in the business of business. But while you do that, if the work delights the senses and builds a historical pathway for others to follow it's a vindication of being in the right direction. It helps build an ecosystem of people thinking differently."

Bagging Gold comes as a welcome surprise to the notoriously award averse Lowe Lintas which apart from abstaining from local awards for over a decade, has dragged its feet about sending entries to Cannes. When we called R Balki for a comment he was in the middle of a shoot in Helsinki, but texted back ecstatically with, "Awesome!! Ya!! Good for ideas!! It's a super kickass idea."

Speaking of the win, Deepa Geethakrishnan, president, Lowe Lintas says, "Kan Khajura Tesan is truly a collaborative effort between the client, who birthed the core idea, the creative and account and media teams. The insect has travelled all the way from Bihar to the South of France." Sources at the media agency PHD were unavailable for comment at the time of going to print.

Often Indian campaigns are too desi for their own good at Cannes. Kan Khajura Tesan is the exception.

Nair believes it's because, the idea is "simple, inventive and not difficult to explain no matter where you belong. We are sometimes guilty of complicating the idea." Arun Iyer, national creative director, Lowe Lintas, opines that the idea matched the judges' sensibility of India. He adds, "Winning at Cannes is a good recognition. But this is a bonus; beyond a point we don't think about awards."

Many creative leaders complain young Indian ad folk spend more time trying to crack relatively new and therefore presumably 'easy' categories like Mobile and Digital, while ignoring the meat and potatoes of television and print. This win proves that convincing ideas on big brands beat all statistical finagling or hedging so popular with agencies. Not that we expect them to stop anytime soon, though.
Read more on
Cannes
Lowe Worldwide
Lowe Lintas
PhD
Gold
brands
Hindustan UniLever
HUL
Unilever
riders

Why India can't be at Cannes

Lions set to roar at Cannes from today