It has been learnt that Japanese sports equipment maker Yonex is in talks with Sindhu after her contract with Chinese sporting goods maker Li-Ning ended.

on Aug 20, 2016)
With a billion hearts beating in rhythm with their moves, India's Olympic athletes will return from Rio to something more than pure adulation. In store could be lucrative deals and sponsorship support from brands, something that has been in low gear in sports other than cricket.

German sportswear brand Puma's India MD Abhishek Ganguly has been sporting Olympic silver medal winner PV Sindhu's picture as his Whatsapp profile picture, despite having a world-beating Usain Bolt as a Puma-sponsored athlete, a signal of positive response to the brave performances by several Indian athletes.

"Sindhu has been inspirational. She showed her grit, talent and passion and has mesmerized the entire country . I am confident she is going to motivate lot of youngster to take to sports," he said. "Badminton requires immense flexibility and endurance, and fitness is extremely important. We will deliver our responsibility of kitting and supporting talent across India." 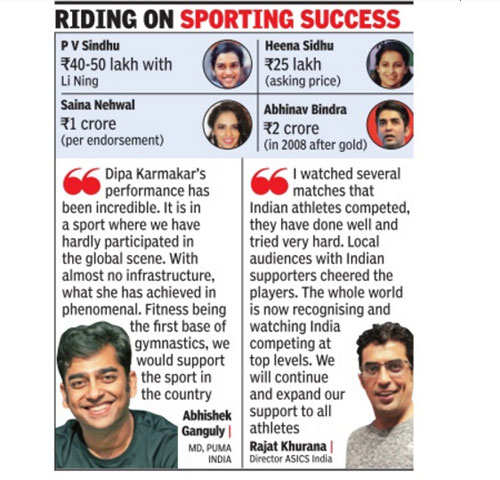 It has been learnt that Japanese sports equipment maker Yonex is in talks with Sindhu after her contract with Chinese sporting goods maker Li-Ning ended. Industry sources said the Hyderabad-based shuttler's deal with Li-Ning was worth around Rs 40 lakh per year.In comparison, fellow shuttler Saina Nehwal, commands around Rs 1 crore for endorsements. However, TOI could not independently verify the sums.

In Rio, Rajat Khurana, director of the Indian arm of Japanese footwear maker Asics, has been watching the proceedings like a hawk. While Asics-sponsored Indian tennis players Yuki Bhambri and Karman Kaur Thandi did not make it to the Olympics this year due to various reasons, Khurana is positive that the recent performances by athletes such as Dipa Karmakar, Sakshi Malik and Sindhu will help sportsper sons other than cricketers to gain recognition.

"We will continue and expand our support to all athletes," Khurana said. "Personally , I watched several games in which Indian athletes competed. They have done well and tried very hard, I felt very strong presence for Indian players in terms of supporters and the whole world is now recognizing and watching India compe ting at top levels. We did well in some sports, have been able to leave a lasting mark and I believe a little more effort is required to make a noticeable presence in the international arena."

Sam Balsara, founder, chairman and MD of Madison World and Madison Communications, said brands prefer associating themselves with winners. "For an athlete, a medal at the Olympics is the gateway to commercial success," he said. “I am sure, a lot of brands will want to approach our athletes for sponsorship deals once they are back from Rio."