Some other retailers attributed the rise in demand to fresh merchandise, fewer discounted merchandise of big brands on online portals, and early onset of winter chill in some parts of the country.

Top retailers such as Future Group, Arvind Brands, Shoppers Stop, Vijay Sales, Puma and Max report buoyant demand over the past two weeks. Future Group founder and CEO Kishore Biyani said the country’s largest retailer is set to grow its business 25-30% this Diwali over last as sentiments look positive. “Ecommerce is still a minuscule of the entire market, except a few categories like mobile phones, so there is not any impact on business,” he said.

Some other retailers attributed the rise in demand to fresh merchandise, fewer discounted merchandise of big brands on online portals, and early onset of winter chill in some parts of the country.

“It (online) had a novelty factor that helped last time,” said J Suresh, chief executive at Arvind Lifestyle Brands, which sells brands such as Gap, US Polo, Wrangler and Calvin Klein. “With fewer discounts by ecommerce and new season merchandise offered by physical retailers, we are seeing same-store sales growth of 8-15%,” he said. A year ago, ecommerce giants Flipkart, Amazon and Snapdeal had pursued an aggressive discounting policy during the festive season to gain market share and traffic. This impacted demand in physical stores, even prompting traditional retailers to approach the government over what they said was predatory pricing. 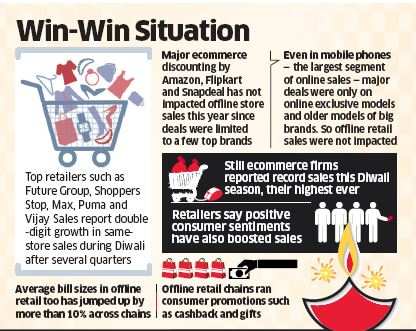 This season, while the ecommerce players got good response to their big sale events, their discounts were mostly limited to select brands such as online exclusive ones, old merchandise and their own labels as they looked to protect margins.

This also signals that ecommerce players and brick-andmortar retailers can coexist in the market, without necessarily harming each other. Historically, Diwali is considered a no-discount period for physical retailers as brands try to cash in on the positive festive season sentiment and fresh merchandise. Physical retailers have not changed this strategy this year despite reporting low same-store sales growth of 5-8% in the last two quarters and their online rivals advancing their sale period.

Govind Shrikhande, managing director at the country’s largest department store chain Shoppers Stop, said the “huge gap” between end of season sales in August and Diwali has also helped the surge in demand. “There was a pentup demand which is reflecting in a higher double-digit growth since last month after a dull September,” he said. “We aren’t seeing a huge surge in footfalls which indicates higher billing size or better conversion at stores,” Shrikhande added.

A survey by global research firm Ipsos suggested that nearly 81% consumers would buy from offline stores during festive season and not from online companies even as they were holding up purchases in anticipation of discounts.

The festive season peaks between Durga Puja and Diwali with Karva Chauth and Bhai Dhuj coming in between. The period — which is also when the salaried get their bonuses — traditionally marks an upsurge in consumer spending, accounting for at least a third of sales for big brands. “Money is never an issue for consumers during Diwali,” said Nilesh Gupta, MD at electronics retail chain Vijay Sales. “Our sense is either there is a revival in consumer sentiment or they are hopeful that things could get positive soon at the macro level.” Vijay Sales, he said, is seeing a growth of over 20% this season, its highest in the last three years.

Industry insiders said big marketers such as LG, Apple and Panasonic started their festive promotions much earlier than usual this year to ensure the offline trade is not hit hard by online discounts. K Krishna Pawan, executive director at cellphone retail chains BigC Mobiles and Lot Mobile, said sales in their 225-odd stores have not been impacted by online discount sales because there was hardly any online deals on mainline smartphone brands and current models.

Meanwhile, ecommerce majors have started consolidating their business, having significantly increased the number of vendors and product categories on their platforms and with more and more people taking to online shopping through mobile apps, which has helped expand the overall market.

Max Retail executive director Vasanth Kumar said consumers’ wallet size may be getting thinner due to some shopping online, but it is getting compensated by newer customers and a positive sentiment all around. Max has grown same-store sales by 15% over the last festive season and its average billing value has increased 10% over last Diwali. Industry estimates suggest that ecommerce companies will spend .`2,000 crore this year on marketing and offering discounts to consumers during the festive season.
Read more on
Sports
Apple
market share
Future group
Panasonic
Flipkart
SnapDeal

Amazon and Future Group to cross-leverage each others' sales channel