Air India has after a span of 4 years opted for a two-class (business and economy) in the configuration of its Neo planes.

HYDERABAD: National carrier Air India plans to add 44 Airbus A320 Neo planes to its fleet in the next three years, 68% of which will be net additions to capacity for the first time in more than seven years. Air India will next week introduce financial bids for leasing 15 Airbus A320 Neo planes, said two people aware of the matter.

“Three bidders have already responded to the request for proposals that the airline put out recently. It is aiming to get all 15 of the planes between January 2017 and March 2018. The management will consider who is fast with deliveries,” said one of the persons cited above, insisting anonymity. Subsequently, there will be a tender for 15 more of the aircraft, he said. 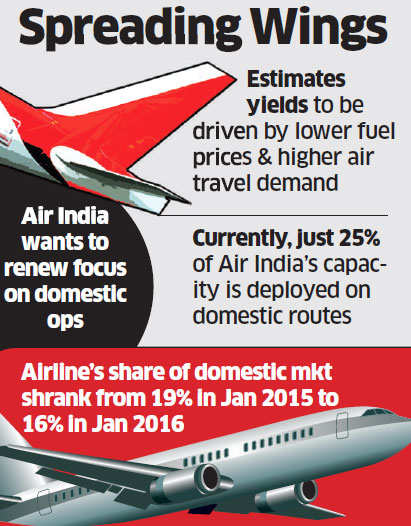 The airline on Wednesday said it signed a lease agreement with Kuwait-based ALAFCO for 14 Neos.

“There’s a new promise in the domestic sector. We have seen yields improving. But currently, only 25% of our seat capacity is deployed in domestic operations while the rest goes into international. We aim to fix that, and expand our domestic capacity as fast as possible,” the person said. AI’s share of domestic market shrank from about 19% in January 2015 to 16% in January 2016. Air India had placed an order for 43 Airbus A320 planes in 2007 as part of its $15-billion 111plane order to Airbus and its US rival Boeing. Two-thirds of the planes were supposed to replace aircraft while the rest would be net additions. “As our existing fleet grew older, all planes eventually went into replacing them,” he said.

Air India has after a span of 4 years opted for a two-class (business and economy) in the configuration of its Neo planes. The person cited above said the rest of the 15 would also be similarly configured. In a statement on Wednesday, Air India said the planes would come fitted with the new generation CFM leap engines which would reduce noise and emission, enhance the operational efficiency and reduce fuel consumption by at least 15%. The person said the additional Neos would also preferably be fitted with CFM engines.
Read more on
Air India
economy
Boeing
Airbus
Airbus A320 Neo

Vistara may explore opportunities to bid for Air India

Air India back with Amadeus for ticketing solutions