Aviation ministry officials, including minister Raju, feel that flying rights to Dubai should be increased as both sides have exhausted their quotas.

Sinha feels certain Middle East carriers have been using traffic from India to create airport hubs in their home bases at the country's cost, and is opposed to an immediate increase in bilateral flying rights.

India and Dubai currently allow 63,000 weekly seats to carriers from each side and airlines have exhausted this quota. While Dubai has sought an increase of about 50,000 weekly seats, India is likely to agree to about 15,000 seats.

Three officials in the aviation ministry, who did not want to be named, have acknowledged that a decision on flying rights is pending because of divergent views between the junior minister, top bureaucrats in the ministry and the minister for civil aviation, Ashok Gajapathi Raju.

One official said Sinha is yet to sign off on the proposal to grant a "nominal" increase in entitlements based on the requirement of Indian carriers.

Justifying his stand, Sinha told ET that having a long-term policy on flying rights will help the sector. "We have received requests from various countries on enhancing bilateral rights. Instead of dealing with them one by one, we need to develop a comprehensive strategy on bilateral agreements with various countries, which will shape the sector in India." 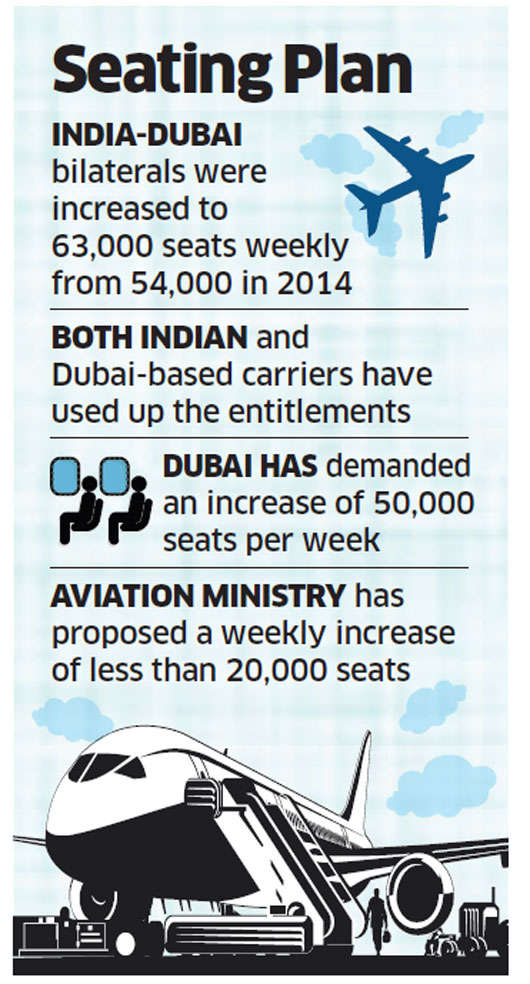 The minister also suggested the areas that the policy should cover. "The strategy would deal with four factors: capacity requirements and allocation; destinations (whether it will be East or West); number of ports of call in India; and whether the bilateral rights would be allocated at once or over a period of time."

Aviation ministry officials, including minister Raju, feel that flying rights to Dubai should be increased as both sides have exhausted their quotas. Also, many Indian carriers are waiting to add flights to Dubai.

Raju told ET that bilateral flying rights should be increased immediately and a long-term plan can be formulated later. "The aviation policy says that unless our carriers reach 80% (of rights), we will not have negotiations with any country on bilaterals," he said. "In this case, carriers from both sides have utilised much above 80%."

The current policy, he said, has been formulated by the cabinet and there is no reason why it shouldn't be implemented. "We can always make a long-term plan on bilaterals, but the cabinet of the day has approved this policy that allows negotiations only after 80% seats (are) utilised. Also, we have worked a lot in ensuring that our carriers get slots at Dubai airport and that has helped our carriers. We can always make a comprehensive plan but bilateral entitlements should be negotiated. As it is, we are allocating incremental rights, taking into account their performance in the next two years," Raju told ET.

Aviation analysts, however, support Sinha's stand and say India needs to have a long-term policy.

"India does not have a long-term national bilateral policy in place and continues (an) ad-hoc and informal approach towards granting traffic rights. Such ad-hocism is later not defensible against Comptroller and Auditor General audits and, hence, we are forced to take a cautious approach," said Kapil Kaul, CEO of the Centre for Asia Pacific Aviation-South Asia.

Kaul said India needs to have a "clear strategy which is driven only by our connectivity needs and strategic interests — (it should be) balanced, equitable and (should) benefit us".

He also blamed the skewed aviation policy that follows an 'open sky' principle for countries beyond 5,000 km — allowing airlines from nations beyond this radius to add unlimited flights on a reciprocal basis — but puts curbs on flights from nearby destinations (less than 5,000 km).

"(This policy) has created a structural imbalance that needs to be corrected. Continuing such policies will create serious geopolitical challenges and hurt India's economy," Kaul added.

Why India is placing Su-30 fighter jets in South India

In India, commercial vehicles unlikely to do well in 2020: Timken India CMD

Is India on the verge of an infra boom?