The India-Gulf air routes are some of the most lucrative in the world due to several reasons, ranging from India's migrant labour traffic to business relations worth billions.

By
Anirban Chowdhury
, ET Bureau|
Last Updated: Apr 28, 2017, 11.11 AM IST|Original: Apr 28, 2017, 10.54 AM IST
0Comments
MUMBAI: In a likely solution to the long-standing debates and lock jam on India’s bilateral air service agreements with the UAE, the aviation ministry has proposed to club the flying rights given to four separate Emirates under one pact.

If the proposal goes through, the new agreement will give more room and flexibility to carriers in India and the UAE in their operations between the countries.

For example, if an Indian airline is using only half its flight rights to Sharjah, it can, under the proposed agreement, deploy the remaining capacity to Dubai. On the other hand, a carrier from Sharjah need not fly Indians only to its base, but can also take them to Ras-Al-Khaimah.

The minister of state for civil aviation, Jayant Sinha, has called a meeting of airlines, sector regulator Directorate General of Civil Aviation and foreign ministry officials early next month “to examine the pros and cons” of the proposal.

ET has seen a letter sent by aviation ministry calling officials and industry representatives for the meeting. It also explains the proposal.

The India-Gulf air routes are some of the most lucrative in the world due to several reasons, ranging from India’s migrant labour traffic to business relations worth billions between India and the Arab nations.

The aviation relationship between the two regions has been a subject of heated debates, primarily as it is seen as skewed to benefit the much larger, financially muscled Gulf carriers. India’s bilateral air traffic rights with the UAE alone are higher than its combined rights with all of Europe and several times those with countries such as Singapore, Malaysia and Thailand.

Taken together, Indian carriers deploy 99,009 weekly seats to the UAE, which means that in the new agreement, they will have the room to deploy 35,432 more seats. What’s more, they can deploy the seat to any of the four emirates. For UAE carriers, the unused seat capacity is 15,055. 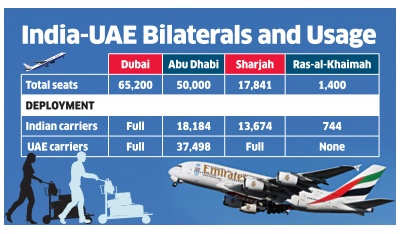 The new agreement will likely lead to more flights on the India-Dubai sector, already the busiest international route out of India. Under the existing, fragmented agreements, carriers of both India and Dubai have exhausted their bilateral seat capacities.

Dubai has asked for 50,000 additional weekly seats, a request on which the ministry has been unable to arrive at a decision yet. Sinha, who is against giving more rights to Dubai, and union aviation minister Ashok Gajapathi Raju, who is agreeable to the proposal, have publicly expressed their differences of opinion.

From the UAE, Emirates, which recently cut 25 per cent of its capacity to the US, would likely lead the capacity addition into India. If Emirates gets a larger share of the unused seats, its capacity share from India will increase to 12 per cent from 10 per cent, making it again the biggest international airline out of India, a position it lost to the Jet-Etihad Airways combine last year. Next would be Air Arabia. In fact, it was Air Arabia’s proposal to connect India to not just its base in Sharjah but also Ras-Al-Khaimah that got the Indian aviation ministry thinking on the lines of a combined air service agreement.

One of the challenges for Indian carriers to expand services to the UAE will be getting airport slots, especially in Dubai, said Habeebullah Ubaidullah, an independent researcher and an expert on India-Gulf aviation ties. UAE carriers use a larger chunk of their bilateral rights vis-à-vis their Indian peers. But since two of the four UAE carriers — Emirates, Etihad, FlyDubai and Air Arabia — use wide-bodied operations, their total weekly slots at more than 25 Indian destinations total 505, less than the 543 already used in the UAE by India’s Jet Airways, Air India Express, IndiGo and SpiceJet, which deploy smaller, narrow-bodied aircraft on this route.

Under the proposed new agreement, Indian carriers would be just 8,577 seats short of using 80 per cent of their seat capacity to the UAE. If that is crossed, it will, according to the new civil aviation policy, trigger a fresh round of negotiations for enhancement of bilateral rights between the two countries.
Read more on
Ashok Gajapathi Raju
bilateral air service agreements
Comments
Add Your Comments
Commenting feature is disabled in your country/region.