By
Devina Sengupta
, ET Bureau|
Nov 08, 2013, 01.15 PM IST
0Comments
MUMBAI: BhaveshSoni was born and raised in Mumbai, but abandoned the maximum city and moved to Vadodara in search of a quieter, better life. His 25-km commute to work took him two hours in Mumbai; it’s now a 10 minute drive in Vadodra.

He paid Rs 10,000 for a domestic help; the cost has halved now. He is set to buy a four-bedroom penthouse for Rs 30 lakh in his new city; something similar would have cost him Rs 4.5 crore in Mumbai.

“I can come home for lunch everyday,” says Soni, a deputy general manager of Vadodara for Serco Global Services, a BPO firm. “I have a two-year-old kid and need to strike a work-life balance.” He and another colleague, a training lead, asked for a transfer when Serco Global Services opened a new centre in Vadodra.

Serco Global is a large BPO with over 40% of its 47,000 employees working in non-metro cities. It typically needs to fill about 300 lateral and vertical vacancies every month. And about 5% to 7% of applications for these jobs come from candidates keen on moving out of larger cities into smaller places like Vadodra.

Even as millions continue to pour into India’s big, bustling cities in search of better employment, a sizeable number of young professionals, especially in the BPO sector, are doing the reverse – migrating to smaller towns for better quality of life and more time with family.

Aegis, the Essar group’s BPO company, has cleared 400 such transfer requests from employees keen to move to smaller locations from large cities, all in the past 18 months. These executives, mostly in the 25-35 age bracket, have sought out postings in Chhindwara, Jamshedpur, Srinagar and Bhopal. “We are about to open a centre in Sivaganga and have already received transfer requests from our employees in Chennai,” says an Aegis official.

Bangalore-based Mphasis has seen similar movement to Indore, Raipur and Bhuvaneshwar from Bangalore and Pune. Most senior managers at Firstsource Solutions’ centres in Jalandar, Vijaywada, Siliguri and Cochin have come on such voluntary transfers from larger cities.

“Who wouldn’t want to be a king in their region and a shift to smaller towns given the opportunity?” says Sangeeta Gupta, senior vice president, Nasscom. Earlier, companies would struggle to find even freshers for smaller towns; senior managers were next to impossible. Now, a lot of managers are open to such a move, adds Gupta.

“Getting employees to relocate from metros has become easier than it used to be,” Shiv Agrawal, MD of ABC Consultants, a placement firm. “Schooling and living standards are better, and for such transfers companies do not have to pay any extra salary to the candidates as cost of living is lower in smaller towns.”

R S Deshpande, former director of Institute of Social and Economic Change in Bangalore, says there are three main reasons behind this `reverse migration’ -push, pull and chain links. Push because metro dwellers are getting pushed out to smaller locations that provide them with similar social strata at lower cost.

Pull because smaller towns are developing and are beckon young ITes workforce who want to enjoy better work-life balance. In the ‘chain link’ theory, people opting for such transfers attract peers to follow.

Says Shazad Malik, 27, now a team leader at Aegis centre in Srinagar, who came in on a transfer from Delhi: “Srinagar has developed in the last few years and five of my friends have also moved back from Delhi.” 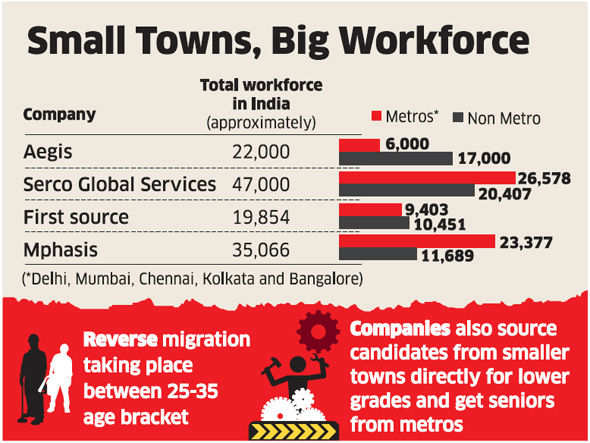 Such reverse migration is mostly seen among BPO workers, since the manufacturing and FMCG industries typically hire from local areas. This is not unique to India.

Aegis employees, for example, have asked for transfer from its Dallas centre to small towns like Killeen and from Florida to Port St Lucie to escape higher costs of living. Executives taking such transfers sometimes also get larger responsibilities. Pankaj Kakkar headed a team of 20 in Delhi. He now has 800 employees reporting to him in Lucknow.
Read more on
Friends
fmcg
Raipur
penthouse
theory
Comments
Add Your Comments
Commenting feature is disabled in your country/region.