Delhi-based journalist Samanth Subramanian's "This Divided Island" has been nominated for the Samuel Johnson Prize 2015.

By
Rohan Laik
, ET Online|
Updated: Oct 12, 2015, 03.24 PM IST
0Comments
Delhi-based journalist Samanth Subramanian's "This Divided Island" has been nominated for the Samuel Johnson prize 2015. The book captures the harrowing experiences of the people of Sri Lanka during the civil war in the country that lasted for over a decade.

Having cut his teeth in the literary world with his first publication "Following Fish: Travels around the Indian Coast", Samanth Subramanian, a Delhi-based journalist, has made his way into the list of the literary prestigious with his latest book, "This Divided Island".

The book, which captures the harrowing experiences of the people of Sri Lanka during the civil war in the country that lasted for over a decade, was recently nominated for the Samuel Johnson prize, one of the most prestigious awards for non-fiction in the United Kingdom.

In an e-mail interview, Subramanian talks about his latest literary expedition, the overwhelming response it has received and his life outside journalism.

1) After Suketu Mehta's 'Maximum City: Bombay Lost and Found' in 2005, you have become only the second Indian ever to be nominated for the Samuel Johnson award with your book, "This Divided Island". How is the feeling?

It feels wonderful and quite overwhelming. Every year, I look to the Samuel Johnson long-list to figure out what books I want to read. And the winner of the prize has always been a real humdinger of a book. So it's marvelous to find myself on that very list.

2) Apart from being one of the most prestigious literary awards since its inception in 1999, it also has a significant prize money of 20,000 pound. What will it personally mean to you if you go on to win in November?

I guess the most important thing is the attention that may come to bear upon the subject of my book. The nature of the Sri Lankan war, and the atrocities committed by both sides over the decades, need to be known by a wider audience. These are vital stories, illustrative of all conflict, but also testimonies that should shape Sri Lanka's place in the world and its conception of itself.

3) Other nominations for the prize this year includes "Guantanamo Diary" by Mohamedou Ould Slahi, The Unravelling: High Hopes and Missed Opportunities in Iraq" by Emma Sky, "The Four-Dimensional Human" by Laurence Scott among others. Have you read any/all of them? Any work in particular from the list that you would want to talk about? Who are you betting on to win the award?

Sadly, I haven't had the opportunity to read any of the other books. But I'm eager to pick up several, if not all of them. I admire Robert Macfarlane deeply. He writes with such feeling and heart and honesty. His book, in particular, I am keen to read.

4) You moved to Sri Lanka in 2011 to extensively research for the book, tell us about your experience.

Well, I mean, where to begin?! All of my experiences are really in the book, so the answer to your question is a book-length one! In brief, though, it was revelatory and moving and harrowing. We've all led relatively sheltered lives, so I had never encountered the levels of pain and tragedy that I came across in Sri Lanka. 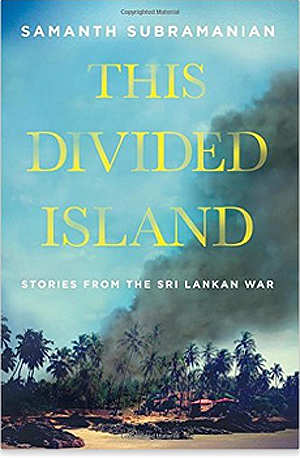 5) Your first book, "Following Fish: Travels around the Indian Coast", is a success in the literary world and it was shortlisted for the 2013 Andre Simon Prize. Now the acclaim surrounding "This Divided Island". How has it been being an author so far? What do you have to say about the response personally?

The response has been gratifying, of course, and I'm so pleased that people seem to like the books. Really, though, the biggest reward has been the writing process itself. The ability to explore a story, or a set of stories, over a few years, to think and read and understand over time, to dig without any constraints of time or word-length -- that's liberating and exciting. This has been the best part of the process.

6) What are you reading right now? What are the books one will find on your bedside table?

I just finished a book called "How The Irish Saved Civilization" by Thomas Cahill, since I was travelling in Ireland at the time. It's a short little history of a brief period when Ireland absorbed and preserved the knowledge of the classical past, even as Europe elsewhere was overrun by the so-called barbarians. Now I'm halfway through HHhH, by Laurent Binet, a loosely fictionalised account of the assassination of the Nazi leader Reinhard Heydrich.

7) As an author, is there anyone in particular who has been an inspiration? Tell us about the fellow Indian's literary work you enjoy reading.

I think you become an author only after being repeatedly inspired by countless people! I love the writing of Naresh Fernandes, Rahul Bhattacharya, Srinath Perur, and Supriya Nair. I read everything they write. Ram Guha has always been an inspiration, ever since I began reading his newspaper columns a couple of decades ago. Mukul Kesavan, Nilanjana Roy... The list is endless.

8) Have you started working on your next project? What can we expect next from you?

No, nothing on the anvil yet. I've been spending this year doing magazine stories, mainly. I hope to start thinking about book ideas next year.

9) Do you think the advent of e-commerce sites have pushed more Indians toward reading?

Frankly, I'm not sure. Certainly the book market has widened both in terms of readership and in terms of the number of published books. And certainly some of this can be attributed to the ease of ordering a book now, through Flipkart or Amazon. Correspondingly, though, the number of interesting bookstores has sadly declined. More than e-commerce sites, perhaps, I think more Indians are reading English books now both because of a rise of authors who can speak to different parts of society and of enhanced literacy in English. Remember, people were always reading widely in Indian languages, and they continue to do so at heartening rates.

10) Do you to read good-old paperbacks or do you prefer doing your reading on the Kindle?

For me, it is always the paperback that does the trick.