Search firm executives said the trend is escalating outside of banks and financial institutions, several of which have women in succession roles.

By
Ratna Bhushan
,
Prachi Verma
, ET Bureau|
Last Updated: Jul 25, 2016, 09.15 AM IST
0Comments
NEW DELHI: Are women better to trust your money with? Well, an increasing number of companies seem to think so, going by a recent spurt in women taking over key finance roles in firms across sectors.

"There is an ask now for women at top financial jobs,” said Uday Chawla, managing partner at executive search firm Transearch India. He said that over the last few years his company for the first time has had mandates from multinationals preferring women candidates for finance roles at the CXO level.

Why? Diversity is a critical focus area among global firms across sectors, which have often in the past been criticised for not hiring or promoting enough women at board levels. 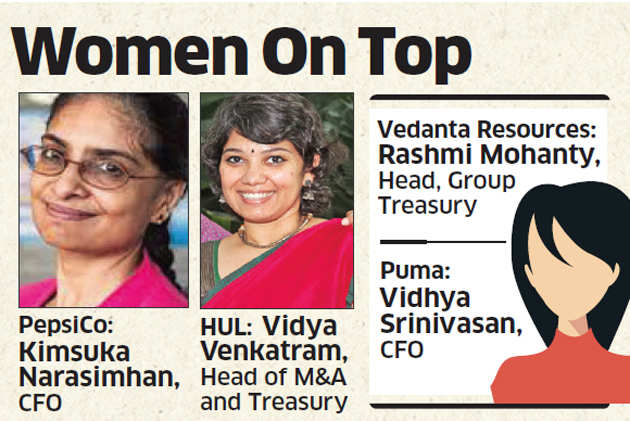 Search firm executives said the trend is escalating outside of banks and financial institutions, several of which have women in succession roles.

"This is new not only for India but even the US. Earlier the hiring for CXO finance roles favoured men. But now the hiring is more on competence and not on gender,” said Chawla of Transearch.

K Sudarshan, regional managing partner for Asia at executive search firm EMA Partners, said the number of women in key finance roles is still low. "There is a dearth of women in finance. Most of the demand from companies is due to diversity focus,” he said.

Diversity is clearly a key result area now for companies.

Coca-Cola’s Sethi, who has been with the beverage firm for eight years now, is now the only woman in its leadership team, as VP – finance. "Sarvita’s credentials in finance position her well to lead the function across South Asia and India,” said Venkatesh Kini, president at Coca-Cola India & South West Asia.

In 2011, when HUL had poached Geetu Verma from PepsiCo to head its food division as executive director she was only the second woman in its leadership management.

All three are HUL veterans. Asha Gopalakrishnan, general manager, finance, for supply chain in South Asia, had joined the company as management trainee in 1996 and worked across category accounting, planning, logistics and buying before her current role. Suman Hegde, who heads finance for the home care business in South Asia, joined HUL in 2003 and rose through the ranks. Vidya Venkatram, who heads M&A and treasury, has over 12 years done stints across accounting, managing buying and critical projects.

Beverage and snacks maker PepsiCo’s Kimsuka Narasimhan is among the rare women leaders within consumer goods to head a finance function for over seven years. Led by global chief Indra Nooyi, PepsiCo has always had a wide representation of women in cross-function leadership roles.

Recruitment experts, however, said that sectors that require intense lobbying and interactions with governments continue to prefer men in top finance roles.

R Suresh, managing director at RGF Executive Search, said demand for women leaders in finance is primarily from companies that do not operate in "rent-seeking sectors”. "This is more seen in sectors such as consumer, IT, BPO, R&D, healthcare,” he said.
Read more on
vedanta
Aditya Birla Group
Hindustan UniLever
PepsiCo
Puma
Sarvita Sethi
Comments
Add Your Comments
Commenting feature is disabled in your country/region.