Women between puberty and menopause are most likely to develop ovarian cysts. They have the potential to turn cancerous.

Twenty-four-year-old Sharadhi, a sprightly youngster who chanted the `work hard, play hard' mantra, began complaining of abdominal pain a few months ago. The frequency of the pain ruled out bad eating or a stomach infection.

When her family doctor suggested a visit to a gynaecologist, Sharadhi was surprised. But an ultrasound scan revealed that she had an ovarian cyst, that too on the verge of rupturing. What followed was a quick laparoscopic surgery to remove the cyst. She was advised 10 day rest before getting back to work.

Yes, ovarian cysts are a good example of something so routine but having the potential of turning life topsy-turvy. These fluid-filled sacs inside or on the ovary are usually formed during ovulation in a woman. According to the US National Library of Medicine (NLM), women between puberty and menopause are most likely to develop ovarian cysts. But women who have attained menopause aren't completely spared of this problem. 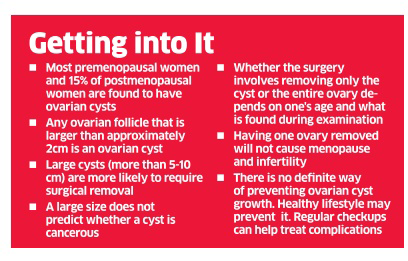 Many women with ovarian cysts don't have symptoms and the cysts are usually harmless. There is also no specific cause for ovarian cysts to form. "Fluctuation in hormonal levels can lead to cysts. But what triggers hormonal changes is not fully ascertained, but stress is definitely not a factor, "said Dr Gayathri Kamath, consultant obstetrician and gynaecologist, Fortis Hospital, Bengaluru.

There are several kinds of cysts that can form on the ovaries, but the most common types, called functional cysts, form during the menstrual cycle and are usually not cancerous.

Complications
Ovarian cysts can cause problems if they twist, bleed or rupture. They have the potential to turn cancerous and so, should not be ignored.

Ovarian torsion (twisting around the fallopian tube) is another complication of ovarian cysts, though rare. This is when a large cyst causes an ovary to twist or move from its original position. Cysts that grow larger than 5 cm are at a greater risk for torsion and are a gynaecological emergency.

Blood supply to the ovary is cut off and if not treated, it can cause damage or death of the ovarian tissue. Ovarian torsion accounts for nearly 3% of emergency gynaecology surgeries.

Ruptured cysts can cause intense pain and internal bleeding. This complication increases the risk of an infection and can be life-threatening if left untreated.

Symptoms of the problem
Although many cysts have no accompanying symptoms, pressure or pain in the pelvic area is a common problem that many women complain of. Irregular menstrual cycle, nausea, vomiting, bloating, painful bowel movements and pain during sex are signs related to ovarian cysts.

Women experiencing ovarian cysts may also have problems eating. Getting full quickly when eating, loss of appetite and losing weight without any reason may be signs of a cyst.

Women with ovarian torsion present with sudden onset of abdominal pain often associated with nausea and possibly vomiting and low-grade fever. "When faced with such symptoms, women, especially youngsters, often put off seeking treatment thinking it has something to do with the stomach and go for self-medication. This only makes things worse, "said Dr Roopa K, a consultant gynaecologist based in Chennai.

Detection
Doctors often check for cysts using ultrasound scan. The scan can tell the cyst's shape, size, location and mass (whether it is fluid-filled, solid or mixed). CT scans or MRI may also be used to see how far the tumours have spread. Blood tests may also be done to check changes in hormone levels and possible cancer. In case the growth is cancerous, a blood test is done to look for a protein called CA125. Levels of this protein tend to be higher in some but not in all women with ovarian cancer.

Treatment
Once a cyst is confirmed, larger, cancerous or persistent cysts may be removed surgically. A laparoscopy is usually conducted to treat ovarian cysts. During surgery, the surgeon can find cysts or tumours and may remove a small piece of tissue (biopsy) to test for cancer. It is possible for cancerous ovarian tumours to return. If that happens, doctors usually advice one more surgeries, sometimes combined with chemotherapy or radiation. It is also possible for a new cyst to form on the same or opposite ovary after a cystectomy. New cysts can only be completely prevented by removing the ovaries (oophorectomy).

Some women, however, are more prone to developing cysts. In these cases, doctors prescribe birth control pills to help reduce the risk of developing certain types of functional cysts that occur after ovulation. "Birth control pills are a safe method to deal with ovarian cysts. They are prescribed for short-term purposes and do not have any long-term side effects. They are not as bad as they are made out to be. They might not go down well with women suffering from migraine though. It is important for patients to follow up with their doctor, "said Kamath.

Cysts and fertility
Women are often worried that cysts may affect their fertility. In general, fertility is not affected by functional cysts. Only women having an endometriotic cyst (formed by a small patch of endometrial tissue that bleeds and grows inside the ovary) may have problems conceiving. In rare cases when an ovary has to be removed, women need not lose hope. "Even if one ovary is removed, a woman can still conceive if her ovarian reserve is good. A simple blood test is all that is needed to check the patient's AMH and FSH levels. These tests are done to determine ovarian reserve, "said Kumar of Mumbai's SL Raheja.

Prevention
There isn't yet a way to stop cysts from forming in the ovaries. Women must be aware of the symptoms and consult a doctor if they are suffering from irregular periods. Also, once a cyst is diagnosed, they must follow up with their doctor to check for recurrence.

Good lifestyle choices can help in the overall well-being of a woman and the same can be said of ovarian cysts too. "Physical exercise can ensure hormonal balance in the body and may prevent cysts to some extent, "said Roopa. "Maintaining ideal weight with sensible eating is a must to prevent any gynaecological problem," she said.

"Women can exercise since it has a positive effect on the body. But they should go for moderate amount of cardio and weight training so as to avoid complications like rupturing or twisting of the cyst (in case they are diagnosed with one)," said Suhasini Mudraganam, head nutritionist, Truweight.
Also read: How to plan the other big moon, the 'babymoon'

Experiencing severe abdominal pain after an alcohol binge? Could be pancreatitis

Dark urine, nausea, abdominal pain? Get checked for hepatitis, it is more dangerous than you think