In my family, we all chase our own dreams: Chennaiyin FC co-owner Vita Dani

Business — and now sport — run in Dani’s family. She’s a cousin of Reliance Industries chairman Mukesh Ambani and the wife of Jalaj Dani.

By
Rashmi Menon
, ET Bureau|
Jun 30, 2017, 08.39 AM IST
0Comments
The success of the IPL has spawned several sports leagues in India. And Vita Dani, Chairperson, 11Even Sports, is at the helm of another competition — this time, table tennis. She wet her feet in the sports business as a co-owner of Indian Super League (ISL) team Chennaiyin FC (CFC). Now, she has her heart set on a TT league. Owning a league is a different ballgame. However, Dani says it’s a “cake walk” after having managed Chennaiyin FC.

Business — and now sport — run in Dani’s family. She’s a cousin of Reliance Industries chairman Mukesh Ambani and the wife of Jalaj Dani, one of the promoters of Asian Paints. In her bare, utilitarian office cabin in south Mumbai, she talks about life as a football team owner, her interest in table tennis and how their family vacations revolve around sports.

Your football team is three seasons old. Being a team , what insights have you drawn?
The learning is constant. Sometimes we go with predetermined notions about people and players. For instance, in Season 1, we had a long, green snake in the car in Chennai. I don’t know where it came from and we had all these foreign players around. I thought they would make a big fuss about it, but they took it in their stride. We all just laughed it off. They were like little grown up children. The second lesson was to never give up hope. In Season 1, we were the underdogs. Everyone had written us off saying, “Yeh log kya karenge.” Everyone else had started the pre-season and our players had no clue who the owner was, what was happening. We had no practice pitch. The players would practice in a school ground. But they were supportive. And in Season 2, we won the title. Third is do your homework. Being over reliant on anyone doesn’t help.

While you won the Season 2 title, the final was marred by a fight between Chennai captain Elano and the FC Goa co-owner Dattaraj Salgaocar. Considering Salgaocar is your relative, how did that incident affect your relationship with him?
What happens on the field in the heat of the moment, happens on the field. It’s a game, not the end of the world. We are all cousins. We are all friends. We [Salgaoncar and Dani] met four days after that and there was no issue at all. Even with Srinivas Dempo [then FC Goa co-owner], there is no problem. He was very sweet and asked me if I could come for a CII talk. This is not the only forum you meet other owners. And I don’t see anyone as competition. 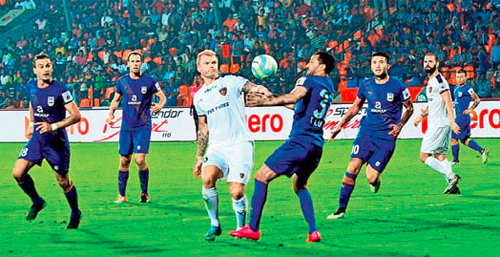 During Season 2, you went to the dressing room to talk to the players. Tell us about that.
I had to learn everything about football after becoming co-owner of CFC, the technical details like players, strategies, formations, playing styles. In Season 2, we had lost most matches. We had to win seven games in a row. That’s the first time I went to the dressing room. I told them in advance that they better be presentable because I am coming in to talk to them. It was nice because we bonded in a different way.

How has it been working with Abhishek Bachchan and MS Dhoni?
Abhishek comes here (to her office) often. He takes interest and gives his opinion on signing new players. He’s easy to work with and fun. With MS (Dhoni), he usually is away on national team duty and also he’s not based here. But I remember in Season 2, when we were really down, I spoke to the team in the dressing room. 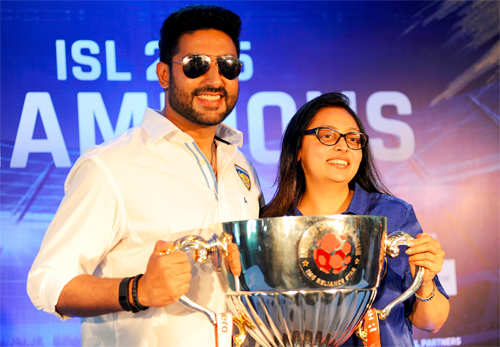 He was also there and I told him, “I know I am giving gyaan to these players but don’t laugh at me. I know you come with a lot more experience and wisdom.” And he said, “Don’t worry. I will talk to them.” The players look at him differently and when he says the same thing it has a different meaning. One thing I definitely want to learn from MS is how to remain cool. I always ask him how he doesn’t get excited or has no expression on his face.

Were there any lessons from football that helped you in the TT league?
Absolutely. Operations and scheduling. We feel this (TT) is a cakewalk now. It’s so much easier and in smaller arenas. In ISL, we would sometimes complain about the schedule not coming on time. But it’s not easy because there are so many aspects to consider. How things are managed, working with different authorities, etc, are learnings from there (ISL). We have a rapport with people in different cities because of having operated in different cities during ISL.

Will your son Mudit (a ranked TT player) participate as a player?
We got into table tennis because of my son. It’s an acquired taste. We realised that the sport could improve and we were anyway looking at investing in sports. But I told my son clearly that if you expect me to call people and ask for favours, that was not going to happen. You have to do it on your own and if you deserve it, you will get it. If you don’t, then tough luck.

In your family, who is the biggest sports buff?
My son. He watches all kinds of sports, even darts. As a family, we all like sports. Our holidays are like that as well. We particularly like to spend holidays in Center Parcs. It’s about 80 acres of land all over Europe. The one we like to go to is one-and-a-half hours away from London. There are apartments around and once you enter the premises, cars are not allowed. You either cycle or walk. There are around 100 sports and you can sign up for multiple sports the whole day. It’s the best holiday I have had. It exposes you to different sports and the kids can figure out what they like. The last holiday I had with my daughter (Smiti), we went skiing at Laax in Switzerland but I ended up with an injury. I am still paying the price for it. 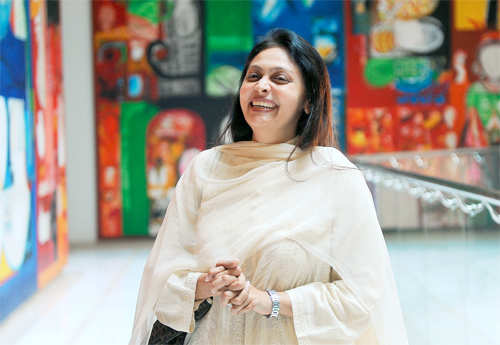 Are you and your husband Jalaj planning to do something together on the work front? What are his plans?
In my family, we all chase our own dreams; in four different directions. I am glad Jalaj does his own bit. I have him at home, that’s enough. But he will figure it out (about future plans).

Tidel Park in Chennai's Pattabiram to have ‘hanging garden’

Anti-CAA protests: Over 600 booked in Chennai