The Gear S though - is a big departure from the norm, quite literally. This is a large smartwatch - it has a 2-inch super amoled screen that curves around the wrist.

By
Hitesh Raj Bhagat
, ET Bureau|
Last Updated: Sep 03, 2014, 11.27 PM IST
0Comments
BERLIN: It's been just a year since Samsung showcased the original Galaxy Gear smartwatch - it was originally powered by Android but all existing users would have received an update to change over to the Tizen operating system.

Since then, the Gear 2 series (also powered by Tizen), the Gear Fit (fitness orientation) and the Samsung Gear Live (powered by Android Wear - the special version of Android, designed for wearable devices) have also been launched.

The Gear S though - is a big departure from the norm, quite literally. This is a large smartwatch - it has a 2-inch super amoled screen that curves around the wrist.

So large, that it looks a small phone strapped to your wrist. And this, in a nutshell, is the idea behind the Gear S. It has its own SIM card so that it can function independently of the phone - it has 3G connectivity, built in GPS (for fitness features and more), you can make/receive calls, compose and send text messages or email (it has a full QWERTY keyboard on screen). When paired with the phone using Bluetooth, it still works like any other smartwatch, delivering notifications and allowing you to control certain functions.

There are various apps optimised for the 2-inch screen of the Gear S. For instance, you can have complete navigation on your wrist with Here Maps since it has built in GPS. You could also use it to track your path, locate the way back to your car in a crowded parking lot and use several S Voice (voice command) features with it. 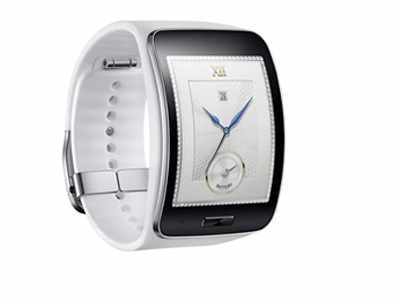 As usual, the entire screen is touch sensitive and there's a single home button. You can swipe up, down, left or right for various other actions. For instance, swiping up from the home (watch face) screen shows you the apps. Swiping left/right from the home screen will show you the various widgets you have installed (news, weather, notifications, etc).

The Gear S seems to be more of an effort to cater to a certain section of people who wanted a smartwatch but though that it does too little. It's increasing choice in the wearables segment since the other devices are not being discontinued.

The large size and form factor will probably turn off a lot of people - they still have various smartwatches from Samsung and other brands like Sony, LG and now Asus - to choose from.

Xiaomi, Samsung to bring parity to online and offline launches