Big Change:
The end of Five-Year Plans: All you need to know

Profit fell to Rs 367 crore in the three months ended June from Rs 1,462 crore a year earlier, India’s No. 1 telco said in a statement on Tuesday. The average estimate in an ET poll of analysts was Rs 355 crore. Profit in the January-March quarter was Rs 373 crore.

Revenue declined 14% to Rs 21,958 crore from a year earlier as data and voice rates fell. It was higher than Rs 21,935 crore in the quarter ended March, which some analysts said indicated slight easing of pressure after three successive quarterly declines. Revenue from India dropped 10% on year. 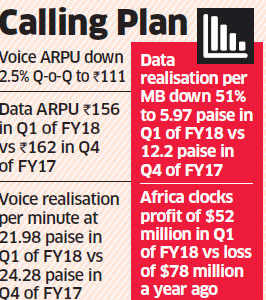 The telco had almost 380 million customers across India, South Asia and 15 countries in Africa at the end of June. In India, which makes up about 78% of overall revenue, the company had about 281 million mobile subscribers, up 2.6% from the March quarter.

“The pricing disruption in the Indian telecom market caused by the entry of a new operator continued with industry revenues declining over 15% Y-o-Y, creating further stress on sector profitability, cash flows and leverage,” Gopal Vittal, MD, India & South Asia at Airtel, said in the statement. “Consequently, our revenues declined 10% and EBITDA margin eroded by 5.3% on year.”

The fall in rates resulted in data usage tripling and voice traffic growth of 34% on year. “We also added 5.2 million data customers in the last quarter — our highest ever,” Vittal said.

“While the revenue fall is not drastic due to launch of unlimited lowprice data and voice plans in mid-March, profitability is clearly impacted,” said Prashant Singhal, global telecom leader at EY. Bharti Airtel shares gained 1.8% to Rs 427.60 at close on the BSE on Tuesday, after touching a 52-week high of Rs 431earlier in the day. The results were announced after the markets closed.

In Africa, the telco reported a profit of $52 million compared with a loss of $78 million a year ago, helped by growth in data customers and consumption.

India continued to be a worry. Reliance Jio, backed by India’s richest person Mukesh Ambani, started commercial operations on September 5 with free voice and data offers that continued till March end. Although Jio has started charging for its data services, prices are below market rates and voice remains free on its network. The company said last week it plans to launch a 4G feature phone that will be offered effectively free of cost.

“Their focus appears to be more on customer market share rather than revenue market share, which is a positive for Bharti as it will be able to monetise its high-value customers in metros and tier-I markets as Jio’s focus will be primarily on tier-II and III city customers,” said Pankaj Agrawal, partner at telecom and media consultancy Capitel.

The price cuts helped widen Airtel’s India data user base, but hurt revenue per user and were a drag on the pace of revenue growth from mobile broadband, expected to be the mainstay as the voice business slows. Lower-priced and even free voice offerings helped to increase minutes on the network.

India ARPU for voice and data combined fell 2% on quarter. Separately, voice and data ARPUs fell 2.5% and 4% on quarter, respectively, while realised rates for both services plunged 9.5% and 51.1%, with the drop in data rates sharper than in the January-March period.

The company’s data customer base grew 9.1% on quarter, increasing data usage per user by 96.2% on quarter.

Airtel said the percentage of users leaving the network rose to 3.8% from 3.6% in the January-March period due to competitive pressures.

Consolidated net debt totalled $13.6 billion compared with $14.09 billion in the previous quarter and $12.37 billion a year ago. The margin of earnings before interest, tax, depreciation and amortisation (EBITDA) contracted to 35.6% from 36.4% in the previous quarter, hurt by the fall in revenue even as expenses rose.

Bharti Airtel’s net profit of $52 million in Africa was on marginal growth in revenue to $736 million, also helped by currency appreciation.