NEW DELHI: The Narendra Modi government may shatter a longstanding bar on the state-run pension fund putting money into equities, sending a flood of money — estimated at Rs 6,000 crore per year at least — into the stock markets, potentially making this the biggest source of domestic institutional investment after LIC.

Such a move, which comes as attractive returns from the Indian stock markets have drawn the world’s biggest pension funds, could ease some of the concentration of risk that stems from overseas investors dominating the market, experts said. India’s largest retirement fund, the Rs 6.5-lakh-crore Employees’ Provident Fund Organisation (EPFO), has finally opened its mind about entering the stock market, after nearly a decade of resistance to a finance ministry pitch to park a part of its kitty in equities.

To start with, it is looking at deploying 5% of its corpus in stocks, index funds and exchange-traded funds, based on the recommendation of a high-level panel set up by EPFO that ET has reviewed. To make this possible, EPFO has said the obsolete Indian Trusts Act, 1882, needs to be amended to allow trusts to invest in securities that are not backed by the government. The UPA regime had introduced a Bill to carry out these changes in 2009, but it let the legislation lapse though a parliamentary panel led by BJP’s Murli Manohar Joshi had given its approval.

Annual inflows into the EPFO kitty amount to about Rs 60,000 crore but are expected to go up sharply thanks to an increase in the salary ceiling for statutory provident fund (PF) contributions from Rs 6,500 per month to Rs 15,000 per month, effective from September 1.

The change of stance on equities within EPFO, the country’s second-largest nonbanking financial institution after Life Insurance Corporation, is being driven by two imperatives — the need to generate better returns for members and an inability to find suitable investment options that can be compounded by the higher accretions to its corpus expected in the coming months. 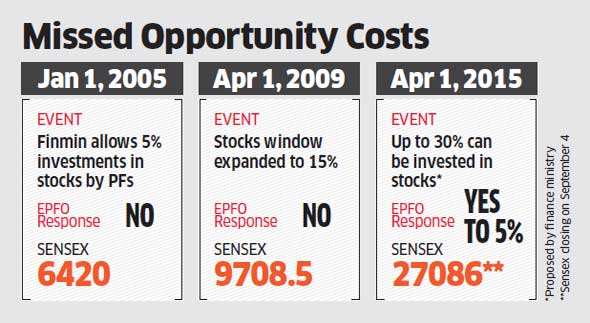 In internal presentations to board members, top PF officials have said the annual EPF rate has been lower than consumer price inflation in four of the past five years, so there is a need to boost returns by considering equity, infrastructure and real estate investments that pension funds around the world use to prevent the erosion of savings through this avenue. Over 85% of EPFO’s money is currently held in government bonds while the rest is parked in debentures or securities issued by banks and public sector enterprises. Though investments in private sector debt are allowed, the norms are so strict that only 5.65% of its corpus is invested in such bonds out of a permissible allocation of 10%.

The finance ministry had first opened up the equity option for non-government retirement funds such as EPFO in 2005, with a 5% allocation in their investment pattern. It enhanced this window to 15% in 2008 and has now proposed allowing up to 30% investment in index funds, exchange-traded funds (ETFs) and stocks whose derivatives are traded on bourses from April 1, 2015. “It’s high time that EPFO began equity investments, and it should start with the employees’ pension scheme, which has pooled savings, instead of individual accounts. The higher positive returns from equities in the long run could help curb the scheme’s deficit that is currently at Rs 11,000 crore,” said Amit Gopal, senior vice-president at India Life Capital, which advises top corporates on retirement benefits.

Gopal said the experience from the pension scheme’s equity foray should be gauged before introducing it in the EPF scheme. “A phased approach will help create a buy-in for stocks and also give EPFO the time to improve its accounting and disclosure standards,” he said. Ahigh-level committee set up by the PF office to examine the finance ministry’s new investment norms has said it is “imperative to invest a minimum” 5% of its inflows in stocks and index funds or ETFs.

The panel, led by former State Bank of India managing director S Vishvanathan, has said that long-term investments in equity gave stable returns “much like bonds”. Apart from mooting changes in the archaic Indian Trusts Act, according to which even existing PF investments in corporate bonds are technically impermissible, the committee has mooted several changes in EPFO operations to facilitate equity investments.

These include effective risk management norms and a change in the valuation methods. EPFO and about 3,000 PF trusts regulated by it value their bond-laden portfolios on a held-to-maturity basis while stocks need to be valued on a marked-to-market basis.

Though the official statement issued by the labour ministry after an EPFO trustees’ meeting last week said the board was not in favour of investing in equities and ETFs, members present at the meeting said the board didn’t discuss the issue much after one member pointed out that the expert committee led by Vishvanathan had asked for an amendment to the Indian Trusts Act before approving equity investments.Board members told ET that they understand the dearth of investment options faced by EPFO’s expanding kitty and are open to considering new alternatives.

“At our board meeting on August 26, we have okayed a major relaxation in norms for investing in corporate bonds. We understand that returns can also improve with equities, so (we) would support a move to invest the pension and life insurance schemes’ corpus into stocks,” said a senior trade union leader, requesting anonymity owing to the sensitivity of the issue.EPFO offers its 8.5 crore members three benefits — a lump sum EPF benefit at retirement, a monthly pension income and a life insurance cover during their working careers.

The benefits are financed by remitting 24% of an employee’s salary to EPFO. About a third of this, or 8.33%, goes to the pension scheme.

Since the EPF rate is declared annually, akin to a dividend, EPFO could move to a net asset value-based system (used for valuing mutual funds) for the equity portions of its portfolio.
Read more on
State Bank Of India
Inflation
risk
markets
stock market
stocks
insurance
open
Derivatives
net worth

Coronavirus and stock market: How to make the market crash work for you

Why the stock market is falling?

Marketing in a machine world