Bitcoin's become so volatile that it looks like a steroidal ETF

Bitcoin has a long way to go before it behaves like a mainstream currency, if it ever does.

With virtual currency flash crashes and a recent string of ransomware attacks all but obliterating bitcoin’s incremental stability, it’s become hard to find a comparable asset. Indeed, the closest match is an exchange-traded fund on leverage steroids that’s supposed to be highly volatile.

Bitcoin now swings more than the Direxion Daily Junior Gold Miners Index Bull 3x Share, or JNUG, an ETF that uses borrowed funds to deliver three times the return on an index tracking small-cap mining companies. And the volatility spread between bitcoin and the inverse short version of the fund, JDST, is the smallest in more than three years. 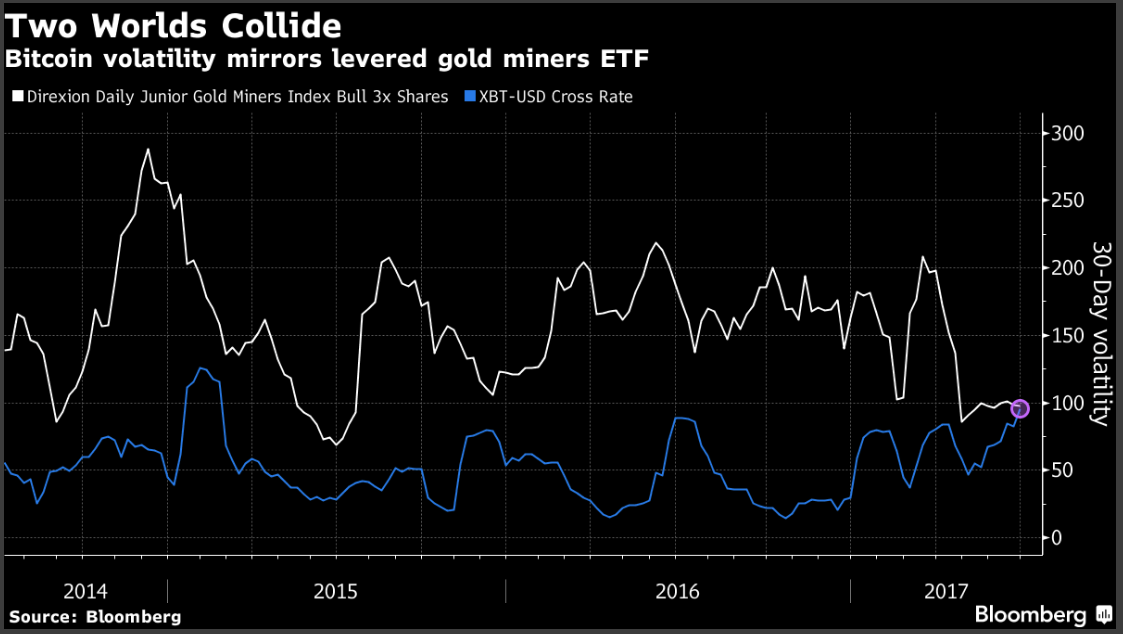 The uptick in volatility looms over the bitcoin market’s legitimization. Since a bubble burst in 2014, the cryptocurrency had become more stable, with two-month realized volatility reaching it’s lowest level in April 2016. But the recent price swings are a painful reminder that bitcoin has a long way to go before it behaves like a mainstream currency, if it ever does, said Dave Nadig, chief executive officer of San Francisco-based research firm ETF.com.

“There have been a lot of advances and it’s been taken more seriously by investors and institutions,” Nadig said. “But there are all sorts of small steps that start legitimizing a market, and by design bitcoin is inherently unregulated. Part of the reason you end up with volatility is because of the lack of market structure.”

Considering some high profile investors have pinned their hopes on bitcoin’s stabilization, the resurgence of wild swings isn’t a great look. Former hedge fund manager Michael Novogratz has 10 per cent of his capital invested in cryptocurrencies, which he said could become a $5 trillion industry, and is looking to add more bitcoin if it falls below $2,000. It’s currently trading for more than $2,500.

Bitcoin has enjoyed a 167 per cent advance so far this year, but has become increasingly correlated to a smaller but growing virtual currency based on the ethereum blockchain. Known as ether, that cryptocurrency quickly plunged from more than $300 to 10 cents last week on Coinbase’s GDAX exchange before snapping back. It’s currently trading for around $309, according to prices compiled by CoinMarketCap.com. 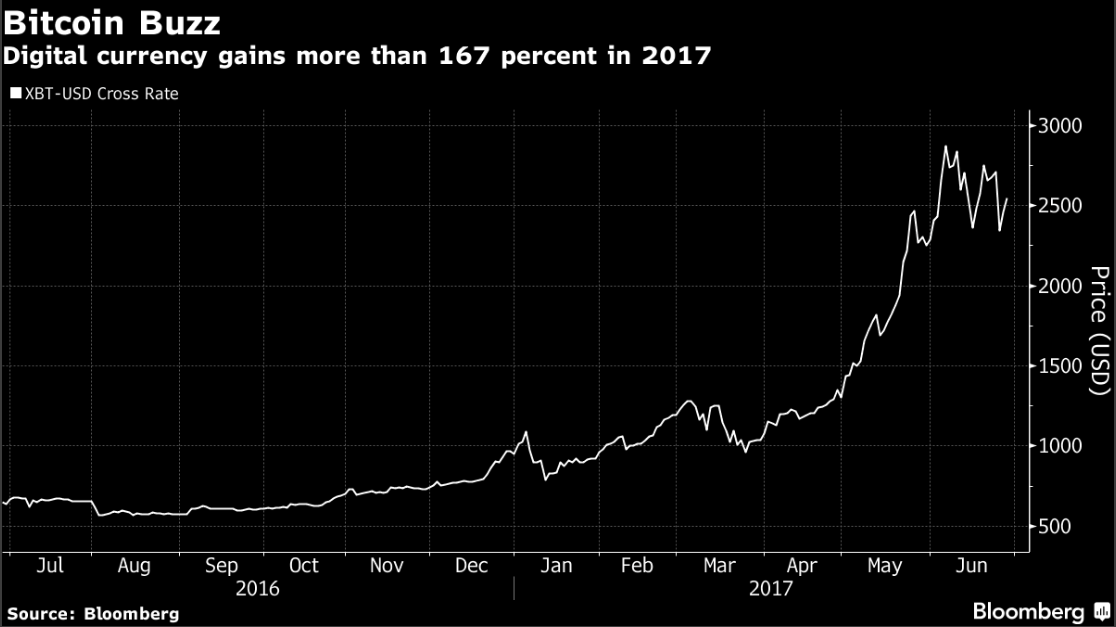 “Over the last two and a half years to mid-last year, volatility had been trending way down and compared to roughly that of small-caps,” Spencer Bogart, head of research at Blockchain Capital LLC, said by phone.“Some of the major drivers now have been bitcoin trading with other cryptocurrencies, and when you have these big run ups, it increases the chances you’ll have a large drop.”

To be sure, precious metal markets have been seen low volatility recently, helping bitcoin jump above the miners index. The CBOE/COMEX Gold Volatility Index has fallen 25 per cent this year, reaching an all-time low last month. Even so, JDST and JNUG are still the third and fourth most volatile ETFs out of the more than 2,000 in the US

Gold and cryptocurrencies are often considered related in the financial markets because of their standing as alternatives to cash. However the precious metal, which has been used in this way for ages, is typically more stable than bitcoin, which started in 2009.

JNUG’s realized volatility is nearly one point lower than bitcoin, according to 25-day data compiled by Bloomberg. That’s the first time bitcoin jumped above the ETF since early 2014, when the cryptocurrency plunged 44 per cent in two months following a surge in prices from $13 to $746 in just one year.

“The broad arc is that there has been an increase in acceptance of bitcoin among various pools of capital,” Bogart said. “The volatility of it in some ways could be turning away some traditional larger investors who say, ‘I can’t touch this, it’s too volatile.’”
Planning to invest in stocks? Now, shortlist scrips at the click of a mouse with ETMarkets Stock Screener.
Read more on
Bitcoin
Hedge fund
Gold
volatility
ETFs

Is China readying its own Bitcoin? It's far bigger than that