“A $100 billion deal seems possible” given the cash on hand, said Richard Cook, an investment manager in Birmingham, Alabama.

Warren Buffett’s career is filled with splashy takeovers that cost billions -- as in $10 billion or $20 billion or $30 billion.

But $100 billion? Even for Buffett, that’d be an awful lot of money. Yet, that is now the buzz among some investors, analysts and Buffett fans.

There are no signs that anything is on the immediate horizon, but they can’t resist fixating on the record amount of cash piling up at Buffett’s Berkshire Hathaway Inc. -- conceivably enough to manage a transaction with a 12-figure price tag. That would put a takeover of, say, Nike Inc. or Costco Wholesale Corp. in range, to cite examples of companies that might appeal to Buffett’s tastes.

It’s a tantalizing proposition as thousands of investors prepare to gather this weekend for the company’s annual meeting in Omaha, Nebraska. Even at 86, Buffett is eager to show his fans that he’s far from done building his empire -- and that he can top his largest takeover, the $34 billion purchase of railroad Burlington Northern Santa Fe in 2010.

Most of all, Buffett wants to own companies with strong competitive advantages that have earnings he can predict far into the future. That’s why firms like Nike or Costco might theoretically appeal, assuming prices are attractive. To be sure, neither has indicated it’s actually for sale -- or that it would play along if a deep-pocketed buyer makes a bid.

Buffett certainly has the war chest to do so. At the end of December, Berkshire had $86.4 billion in cash, earning barely anything. That could balloon to $100 billion by mid-year as profits roll in from its dozens of subsidiaries, like auto insurer Geico and BNSF, said Jim Shanahan, an analyst at Edward Jones. And even though Buffett prefers to set aside at least $20 billion for a rainy day, it’s still “a lot of cash to be sitting on,” Shanahan said. Buffett didn’t immediately return a message seeking comment. 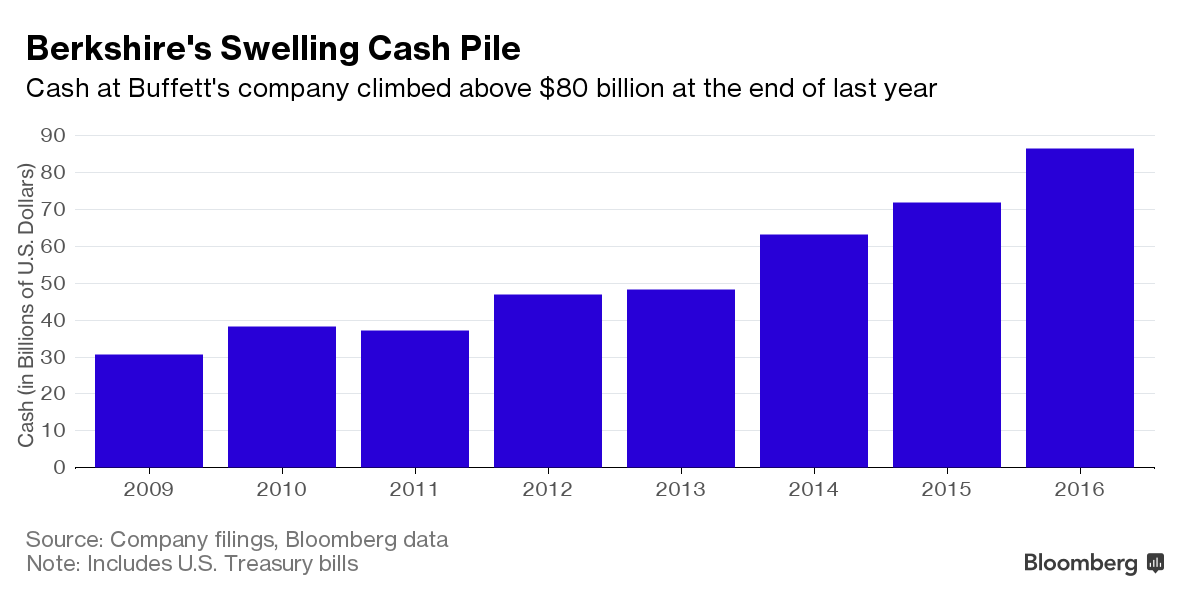 Investment Sales
The billionaire has plenty of other pockets to dig into, as well. He’s indicated he could sell portions of Berkshire’s stock portfolio to fund a deal. Some of those investments, including a $13 billion holding in International Business Machines Corp., could be liquidated without incurring much of a tax bill.

Then there’s debt. Buffett borrowed almost a third of the sum required for last year’s $33 billion deal for manufacturer Precision Castparts Corp. With interest rates so low, that could be a particularly attractive option.

A large deal could also be partially funded using Berkshire’s own stock, though Buffett is reluctant to dilute his shareholders. (He recently quipped he’d “rather prep for a colonoscopy than issue Berkshire shares.”)

What’s possible is not necessarily probable, of course. For starters, there aren’t that many companies that are worth $100 billion and fewer still that might interest Buffett. He’s said, for instance, that he wouldn’t want to own a bank because of the regulation that would come along with it.

Another thing can be pretty much counted out: a hostile bid. He has said he doesn’t chase deals. He recently pulled an offer with Kraft Heinz Co. for Unilever -- which has a market capitalization of roughly $150 billion -- because the consumer products giant deemed it unfriendly.

“If he were given an interesting opportunity to spend $100 billion, he’d find the money,” said Steve Wallman, a longtime Berkshire shareholder and investor in Middleton, Wisconsin. “The more important factor is what’s available.”
Why You Invest the Way You Do: The Science Behind the Art of Investing
Read more on
Warren Buffett
Unilever
nike
Nike Inc
Berkshire Hathaway Inc
Costco
portfolio
earnings

When Warren Buffett's investment was blocked by BofA’s call centre

What’s Warren Buffett up to in Europe?