13 rivalries: Spectacular conflicts that could define 2013

From Ambani vs Mittal in telecom to Narendra Modi vs Nitish Kumar in politics to the Khans in Bollywood, we could see some spectacular conflicts that could define 2013.

From Ambani vs Mittal in telecom to Narendra Modi vs Nitish Kumar in politics to the Khans in Bollywood, we could see some spectacular conflicts that could define 2013.

This is a battle that should have been fought over a decade ago. But Mukesh Ambani, thanks to the split in Reliance empire, exited telecom and a clash of the titans was avoided. RIL’s proposed re-entry into the telecom sector will not only rekindle rivalry with his brother Anil but also with India’s largest telecom company, Airtel. Like RIL, Airtel is betting big on 4G services. Ambani plans to sell the services in low-cost tablets, pitting himself against Mittal.

Fiscal and monetary authorities are kept separate to ensure the smooth running of an economy. Until a few decades ago, the monetary authority, the central bank, was treated as an adjunct to India’s finance ministry. Things have changed and the RBI is far more independent. But thanks to political expediency, differences have mounted and the standoff could escalate.

At a book launch in Mumbai, former Tata Consultancy Services chief S Ramadorai was asked if he had any regrets. The author of The TCS Story said he regretted not being able to retain people like Lakshmi Narayanan who went on to become the chief of Cognizant Technologies. Last quarter, New Jersey-based Cognizant pipped Infosys as India’s second-largest outsourcer. Its scorching pace is now a big threat to market leader TCS as well.
5) MCX vs NSE

It is the war of the brokers. A few months ago, after the privately promoted MCX bourse announced a 50% lower transaction fee for broker-members, NSE, the country’s largest stock exchange, swung into action within days by slashing its fee. While the upstart MCX has grown steadily in average daily turnover, NSE, the largest by daily turnover and number of trades, will go the extra mile to maintain leadership. Watch this space!

The English and French continue to wage war over India. The battle for the Indian drinker’s wallet, that is. On one hand is London-based Diageo, the world’s No. 1 drinks maker, which sells brands like Smirnoff and Johnnie Walker. It got a boost from buying 53% in Vijay Mallya’s United Spirits. On the other is French rival Pernod Ricard, which expects premium pricing to ensure fatter profits for its brands such as Absolut, Ballantine's and Chivas Regal. 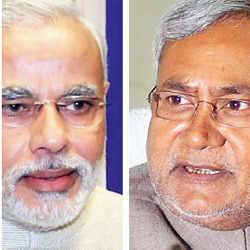 In the endgame of the 2014 polls, one could cancel the other’s chances for the top job. So their lack of bonhomie is understandable.

Despite his popularity in Gujarat, Modi suffers from an anti-minority image and is still unsure of where his party stands on his prime ministerial ambitions.

Nitish is playing the waiting game and is yet to congratulate Modi. In the run-up to the general elections, their battle will be the cynosure of all eyes.

Bal Thackeray, for many years, decided war and peace in Mumbai. Even as his son Uddhav and nephew Raj bicker over his legacy, they need to understand that the maximum city is wiser. The future could belong to the leader with a contemporary agenda: the one who can harness the entrepreneurial potential of the mob. Would that be asking for too much?

Going by his relentless attacks on Sonia and Rahul Gandhi as well as Robert Vadra, it is evident that Swamy’s name is going to recur in the run-up to the 2014 elections. After gunning for the Gandhi family and the Congress government in the context of the 2G scam, he has picked on the allegations against Vadra and also publicly expressed his doubts about the intentions behind the cash transfer scheme. The petitioner is still at large.
10) Apple vs Samsung vs Google vs Microsoft

In sheer snoot value and top-of-the-line design products, Apple is the big daddy of the smartphone and tablet space. However, rivals Samsung, Nokia and Google (with its Android OS) will hope to challenge Apple this year, not just across the world but in India too. Experts say in 2013, “hardware and search” are going to be at the centre of a war in which these tech giants will creep further into each other’s space.

The 1% super-rich vs the 99% others, represented by the Wall Street protests in the US, was one of the most fascinating battles of 2011. But the protests fizzled out in 2012. Does that mean the battle is over? Far from it. One of the first tasks of President Obama after his re-election is executing a plan to tax the rich more. In India too, it is an idea whose time has come. Latest data confirm that gains of growth are cornered by the upper crust.

Salman had a colossal success with Ek Tha Tiger in 2012. SRK followed with Jab Tak Hai Jaan. SRK wanted to release Chennai Express on 2013 Eid. But Salman said his remake of the Telugu film Brindavanam would release then, forcing SRK to delay his film. Their rivalry just doesn’t end.

Owning “properties” such as Iron Man, Hulk, the Avengers and X-Men, Marvel Comics this year eclipsed the sales of arch-rival DC Comics, which despite Christopher Nolan’s turn on Batman, had to settle for second. Marvel expects to repeat the feat in 2013 with sequels. But then DC can never be far behind. Though Marvel made more money to date, thanks to more films, DC made more money per film.