Currently, only toilets can be made under MGNREGS while the beneficiary has to hire labour for construction of the house under the Indira Awas Yojana.

Essentially, a poor person using self labour to build his own house under the IAY could then rightfully demand to be paid wages from the MGNREGS. This could substantially bring down the cost of building a house for the poor in rural areas and also incentivise such construction as the beneficiary will also have an income while he builds the house.

The Jairam Ramesh-headed ministry thinks that nearly 70% of this labour cost can be saved if the beneficiary is allowed to construct the house himself by demanding work under MGNREGS.

Currently, only toilets can be made under MGNREGS while the beneficiary has to hire labour for construction of the house under the Indira Awas Yojana.

The proposal is at a preliminary stage with the ministry working on the viability of the project. 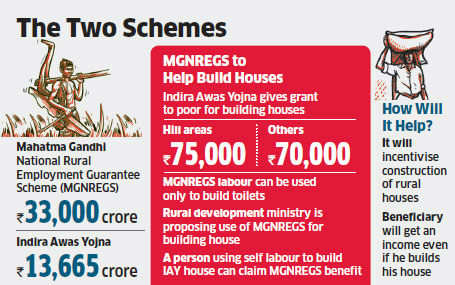 "We are examining the possibility of allowing construction of IAY houses under MGNREGS as it will help to monetise labour. Besides, it will also help more and more people to demand work under MGNREGS who are otherwise losing wages during the construction of their houses," a senior rural development ministry official told ET.

According to the official, who did not wish to be identified, this will help the ministry to significantly save on the overall scheme expenditure which can thus be used to scale up the number of beneficiaries.

The Centre has allocated around Rs 17,000 crore this year to be used for construction of nearly 25 lakh houses under IAY in the current year.

MGNREGS aims to provide livelihood security to people in rural areas. It guarantees 100-days of wage employment in a financial year to a rural household whose adult members volunteer to do unskilled manual work. On an average, 25% of the rural households seek employment under the Act, annually.

Based on the current index, the maximum wage under MGNREGS effective April 1, 2013 is 214 for Haryana and a minimum of 135 for North Eastern States.

The proposal, if tested and approved, would see one more work being added to the existing exhaustive list of permissible work, barely a year after 30 new works were added to the original schedule last year.
Read more on
Jairam Ramesh
Indira Awas Yojana
MGNREGS
Rural Development Ministry

Government to give an additional Rs 12,000 per household for building Indira Awas Yojana house under MGNREGA