IEO was set up as an attached office of the Planning Commission and the post of director general was equivalent to a union minister of state, with a term of three years and extendable to five years.

NEW DELHI: The Narendra Modi-led government has decided to remove Ajay Chhibber from the Independent Evaluation Office (IEO), reversing one of the key decisions of its predecessor and leaving in a state of limbo the institution that was set up with a lot of fanfare last year following a Cabinet decision taken four years ago.

There is little clarity as of yet over the role of the institution following the decision, officials said. "The Appointments Committee of the Cabinet (ACC) on Friday had issued orders saying that Ajay Chhibber, director general of Independent Evaluation Office, has been relieved from his services," a senior government official told ET, requesting anonymity.

IEO was set up as an attached office of the Planning Commission and the post of director general was equivalent to a union minister of state, with a term of three years and extendable to five years. 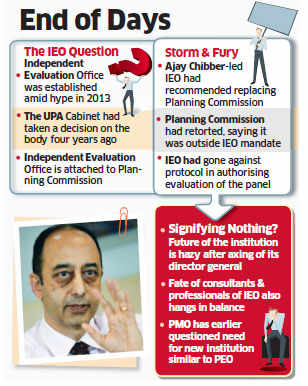 ail query sent to planning secretary Sindhushree Khullar did not elicit any response. Chhibber, who is out of the country, did not respond to a text message from ET while his joint secretary Chhering Angrup Bodh, one of the very few permanent employees of IEO, could not be reached for comment.

The debate on the IEO, which was the brainchild of former deputy chairman of the Planning Commission Montek Singh Ahluwalia, has been going on in the Prime Minister's Office, with the latter questioning the creation of the new institution in the light of a similar body called the Programme Evaluation Organisation (PEO), which already exists in the Planning Commission.

The issue popped up when Chhibber, immediately after the new government assumed office on May 26, had submitted a report to the PMO saying that the Plan panel was as an ossified body that was difficult to be reformed.

"It is clear that the Planning Commission in its current form and function is a hindrance and not a help to India?s development. In my experience it is not easy to reform such a large ossified body and it would be better to replace it with a new body that is needed to assist states in ideas, to provide long-term thinking and to help cross-cutting reforms," Chhibber, the first director general of IEO had said.

The government has already decided to replace the Planning Commission with another body.

ET had reported last week that the committee of secretaries set up for the purpose had decided to strengthen the PEO, leaving the option of either absorbing the IEO under the PEO or shutting down the institution.

With Chhibber's ouster, the fate of the handful of retired officers working as consultants with the IEO and the young professionals hired by the organisation since August last year is unclear as the Centre is not liable to absorb them.

Ahluwalia was the force behind setting up of the IEO, a concept borrowed from the International Monetary Fund and widely prevalent in other countries. However, the proposal met with stiff resistance from central ministries as their programmes were always under scrutiny of the PEO and the new body, they thought, would be no different. It was then decided that the IEO would function completely independent of the government and evaluate the Centre's 12 flagship schemes.

PM Narendra Modi to be chief guest at ET GBS 2020