Hedge funds and mutual funds are flocking to the market's hottest corner, paying 15 to 18 times projected sales in private-funding rounds, fuelling talks of dot-com like crash.

Bloomberg|
Updated: Mar 24, 2015, 04.39 AM IST
0Comments
NEW YORK: A flood of money from unconventional sources has sent valuations of late-stage technology startups, including Uber Technologies Inc. and Snapchat Inc., to levels that haven't been seen since before the dot-com crash.

Hedge funds and mutual funds that once shunned venture- style deals are flocking to the market's hottest corner, paying 15 to 18 times projected sales for the year ahead in recent private-funding rounds, according to three people with knowledge of the matter. That compares with 10 to 12 times five years ago for the priciest companies, one said.

While some of the startups may become profitable, others are consuming cash and could fail. The torrid action is spurring talk that 15 years after the collapse of the Internet bubble, the market may be setting itself up for another bruising fall.

"Some of the valuations are mindboggling," said Sven Weber, investment manager of the Menlo Park, California-based SharesPost 100 Fund, which backs late-stage tech startups. Companies now valued at 16 times future revenue could easily lose a third of their value in a market pullback that Weber and others say may occur in three years. The other people asked not to be named because they didn't want to be seen criticizing competitors' deals.

Such worries have done little to cool the market. Investors' appetites have been stoked by jackpots won in initial public offerings. Among the biggest: an almost fourfold $3.2 billion paper profit earned by Silver Lake Management LLC in Chinese e-commerce giant Alibaba Group Holding Ltd.'s record- breaking, $21.8 billion September IPO. It was a quick kill for Silver Lake, coming three years after the private-equity firm's investment in the company.

Private values also are soaring. Online scrapbooking startup Pinterest Inc. raised $367 million this month, valuing the company at $11 billion. Snapchat, the mobile application for sending disappearing photos, is valued at $15 billion, based on a planned investment by Alibaba, according to people with knowledge of the deal. Uber's valuation climbed more than 10- fold since the middle of 2013, reaching $40 billion in December.

Mutual funds and hedge funds have elbowed into late rounds to boost returns and ensure they can buy blocks of shares in IPOs as competition for tech offerings intensifies. Fidelity Investments, T Rowe Price and Wellington Management and hedge funds Coatue Management and Tiger Global Management took part in at least 37 pre-IPO funding rounds totaling $5.55 billion from 2012 to 2014.

"Mutual- and hedge-fund dollars coming is one of the main things driving these higher valuations and larger deal sizes," said Terry Schallich, Pacific Crest's co-chief operating officer and co-head of investment banking. "You didn't used to see that before. The trend is accelerating."

Investors of all stripes poured $59 billion into U.S. startups last year, according to Seattle-based research firm PitchBook Data Inc., the most since the dot-com era. Late-stage companies received two-thirds of it, with a record 62 firms raising money at valuations of $1 billion or more, almost three times as many as in 2013. About half the investors weren't venture-capital firms, Pitch-Book data show.

Pension money also is pouring in. Government and corporate pension funds, a key source of financing for leveraged buyouts, have reaped gains selling private-equity holdings since 2012. They are redeploying some of those profits in late-stage and growth funds, including vehicles created by early-stage venture- capital firms to meet the demand. 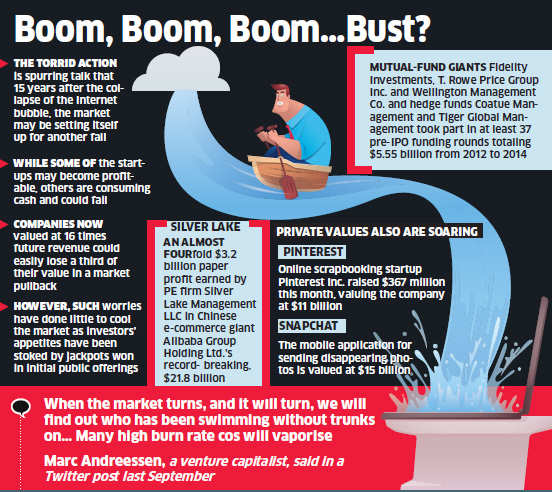 The growth funds of venture-capital firms, which typically avoided pre-IPO rounds of financing, joined the fray. In June, Kleiner Perkins Caufield & Byers and Menlo Ventures were among those that invested $1.2 billion in Uber in a round of funding led by Fidelity Investments valuing the company at $17 billion.

The venture and growth arms of private-equity firms TPG Capital and Bain Capital LLC also took aim at the segment.

"You had what were purely venture firms raising growth funds, and private-equity firms looking for growth deals," said Michael Krupka, a managing director at Bain Capital Ventures, whose group last year gathered $850 million for its largest pool. "Publicmarket investors got into it. Prices got bid way above historic norms."

Today's frenzy has a logic lacking in the days when waves of newborn outfits with big dreams died soon after their IPOs.

Most of today's hottest names produce real revenue, are growing fast and rank among the top three in their businesses. The market's tone is more sober, the investors say. That change in psychology dovetails with another trend: Startups are waiting longer to take themselves public.

"Investors now realize that the biggest growth and highest values for these companies typically come in years eight to 11," said SharesPost's Weber, several years later than historic norms. "To maximize their returns, they are waiting to exit."

Skyrocketing values in the past two years are making that game tougher to play, investors said. By today's standards, Silver Lake paid cheaply for Alibaba in 2011 in a deal that valued the company at $32 billion, less than 10 times sales for the previous 12 months. In 2013, TPG paid a higher multiple for Uber -- a $2.7 billion valuation equal to 27 times net sales for the previous 12 months, according to a person with knowledge of the matter.

Lisa Baker, a TPG spokeswoman at Owen Blicksilver Public Relations, declined to comment on the investment.

Private valuations since then have gotten frothier, at times surpassing IPO values. In the past four months, cloud- storage service Box Inc. and Hortonworks Inc., a data-services provider backed by Yahoo! Inc., went public at valuations lower than their last private-funding rounds. Some late-stage investors have struck deals guaranteeing them a return in an IPO, typically in the form of additional shares they'd get if the offering is priced below what they paid. Known as ratchets, these arrangements water down the gains of other investors who haven't yet cashed out.

Some firms that backed late-stage deals are scaling back or avoiding them. Krupka said that Bain Capital Ventures, which made several times its money cashing out of LinkedIn Corp. in 2011, is prowling for younger startups at lower values, as is SharesPost's Weber. They and others said that as the number of billion-dollar startups multiplies, so have the odds that many will saddle investors with losses.