The Germanwings co-pilot believed to have intentionally crashed a plane into the French Alps had a sick note from his doctor for the day of the crash.

After raiding Andreas Lubitz’s apartment and his parents’ home, investigators found torn-up medical documents declaring him unfit to work, including on the day of the crash, the Dusseldorf prosecutors office leading the German investigation said in a statement Friday.

Authorities believe Lubitz, who was in treatment, hid his medical condition from his employer, according to the release.

Police were searching for clues as to why he appears to have locked the captain out of the cockpit and then crashed the plane, killing 149 passengers and crew.

No suicide note or letter claiming responsibility was found during the searches, according to the statement.

Carsten Spohr, chief executive officer of Germanwings parent Deutsche Lufthansa AG, said on Thursday that Lubitz, who started his pilot training in 2008, took leave for “several months” at one point, declining to elaborate.

However, neighbours described a man whose physical health was superb. “He definitely did not smoke. He really took care of himself. He always went jogging. I am not sure whether he did marathons, but he was very healthy," said Johannes Rossmann, who lived a few doors down from Lubitz’s home in Montabaur.

People in Montabaur who knew Lubitz told AP they were shocked at the allegations that he could have intentionally crashed the plane, saying he had been thrilled with his job at Germanwings and seemed to be “very happy.”

German news media painted a picture of a man with a history of depression who had received psychological treatment, and who may have been set off by a falling out with his girlfriend.

The US Federal Aviation Administration had issued Lubitz a third-class medical certificate. In order to obtain such a certificate, a pilot must be cleared of psychological problems including psychosis, bipolar disorder and personality disorder “that is severe enough to have repeatedly manifested itself by overt acts.”

The certificate also means that he wasn’t found to be suffering from another mental health condition that “makes the person unable to safely perform the duties or exercise the privileges” of a pilot’s license.

France’s leading pilots union said Friday it is filing a lawsuit over leaks about the investigation into the crash of a German jet into the French Alps. Pilots around Europe are angry that information about the final moments of the flight was reported in the media before prosecutors and others were informed. Pilots are concerned that the circumstances of Tuesday’s crash will damage public trust.

Guillaume Schmid of France’s SNPL union told The Associated Press on Friday that the lawsuit is over violating a French law on keeping information about investigations secret while they are ongoing. “We can understand there is a certain pressure, a wish to know," Schmid said _ but he warned that leaking information too early can mislead the public instead of informing accurately.

“Our thoughts are with the victims and their relatives. As trusted professionals, who invest a lifelong career in making air travel safe, this is a very difficult day for us,” it said in a statement. 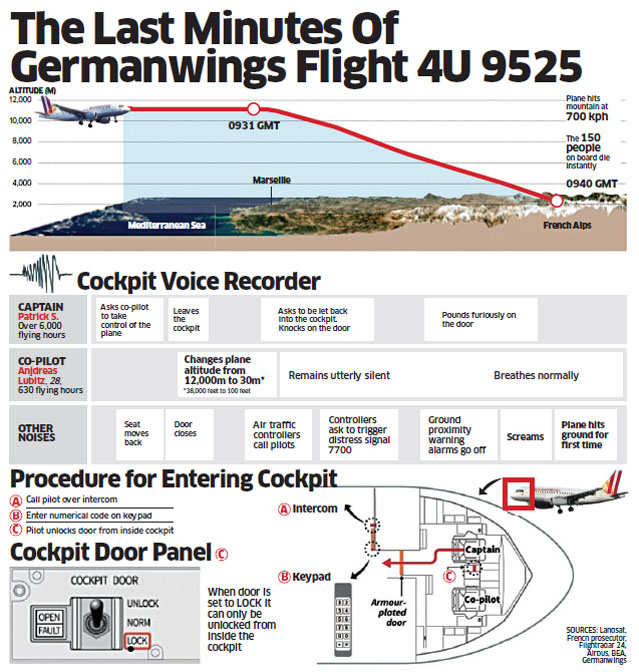 Gaganyaan On, 4 IAF pilots to be trained in Russia

Truecaller branches out to fintech with pilot in India