The doctors said they observed that females outnumbered males among fetuses that were less than or equal to 20 weeks of gestational age, clearly suggesting sex-selective abortion.

on Aug 02, 2016)
NEW DELHI: The analysis of aborted fetuses and newborns abandoned in different parts of South Delhi and brought to the All India Institute of Medical Sciences between 1996 and 2012 has revealed the enormity of the crime prevalent in the capital. There were 238 instances of unborn or newly borns being abandoned reported at the hospital in these 16 years.

Overall, male foetuses were predominant among the prenatal deaths. However, on closer examination, the doctors said they observed that females outnumbered males among fetuses that were less than or equal to 20 weeks of gestational age, clearly suggesting sex-selective abortion.

"As per Indian laws, medical abortion is allowed only up to 20 weeks of gestational age. It is possible that some of the fetuses were aborted after tests revealed it to be female,“ Dr Sudhir Gupta, professor and head of forensic medicine at the institute, told TOI. It is possible to determine the sex of the child through tests, including ultrasound, after 12 weeks of pregnancy, said experts.

"Illegitimacy , financial instability and selective female foeticide are some of the classical reasons put forth for the common motives behind the killing of the newborn," noted Dr Chittaranjan Behera, the corresponding author of the AIIMS study , which has been published in the latest issue of Medico-Legal Journal. 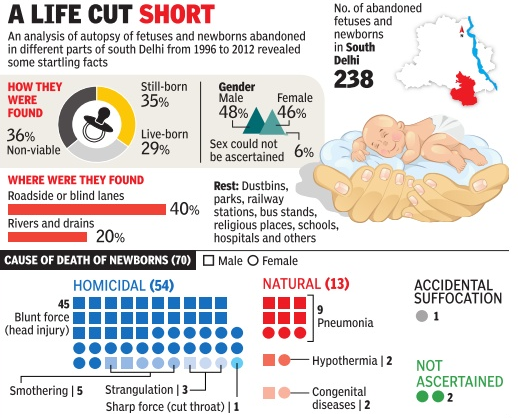 According to Dr Tulsi Patel, a leading researcher on female foeticide in the country , education or affluence has little to do with illegal killing of a fetus or a new born. "It is about a patriarchal mindset. Studies have revealed sex-selective abortion or abandonment when the girl is a second or third child," she said. Pregnancies resulting from relationship outside wedlock or rape are other possible reasons for abandonment.

Shockingly, the AIIMS autopsy record revealed that of the 70 newborns found abandoned in south Delhi during the study period, 54 had been murdered. They were injured on the head by a blunt force, smothered, strangulated or had the throat slit, indicating a particularly cruel attitude.Others causes of death included pneumonia, congenital diseases or hypothermia which, AIIMS researchers said, could be due to neglect and abandonment by the parents.

The study revealed that the place of disposal of the discarded fetus or a post-natal victim was mainly the roadside or blind lanes (40%), followed by rivers and drains (20%). “Bodies were also recovered from dustbins, parks, jungles, railway stations, bus stands, religious places, schools and hospitals,“ it added.

Another survey by the Centre for Social Research in southwest district of Delhi, which had the worse child sex ratio of 836 girls per 1,000 boys in the 0-6 year age-group in Census 2011, showed campaigns against female foeticide had not diminished the preference for a male child. The survey stated that important social stakeholders in the campaign, such as the resident welfare associations, had chosen to remain quiet on the question of illegal abandonment of newborns as they considered fertility a subject of "private and personal affair". Alarmed by the findings of the AIIMS study , Dr Gupta said it showed that strict measures were needed to stop this social evil.
Read more on
South Delhi
Females
All India Institute of Medical Sciences
Centre for Social Research
foetuses