The transparency watchdog had clubbed cases on a single day of applicants who had sought information from on the Land Ordinance.

By
NIDHI SHARMA
, ET Bureau|
Updated: Jun 28, 2016, 02.00 AM IST
0Comments
NEW DELHI: Ending a year-long impasse between the citizens and the government, the Central Information Commission has given a pro-disclosure order and directed the rural development ministry to divulge Cabinet note, file notings and all government communication on the controversial Land Acquisition Ordinance under the Right to Information (RTI) Act.

The transparency watchdog had clubbed cases on a single day of applicants who had sought information from on the Land Ordinance. In separate applications, RTI activist Venkatesh Nayak and journalist Chitrangada Choudhury had sought copies of Cabinet note, file notings and all communication within the government leading up to the promulgation of the controversial Ordinance, which has now lapsed. Though the department of land resources under rural development ministry was the nodal agency for the move, it had denied information saying it held no such records. 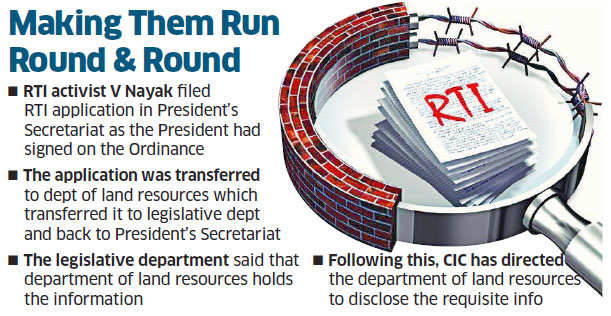 Hearing the plea of the applicants last week , Information Commissioner Sudhir Bhargava directed the government to provide the information. “The Commission after hearing the submissions of the complainant and perusing the records, notes that the information sought has not been provided by the respondent to the complainant. Further, as per the Legislative Department, the records relating to the promulgation of the said Ordinance would be available with the Department of Land Resources. In view of this, the Commission directs the respondent to provide information sought to the complainant within four weeks,” Bhargava said in his order.

The Ordinance had posed the first political test for the Narendra Modi government with the Opposition questioning the urgency. Data accessed under RTI had also shown that only about 8% of the stalled projects in India were because of land acquisition issues. Though the Ordinance has lapsed its contents are before Parliament in the form of a Bill to amend the Right to Fair Compensation and Transparency in Land Acquisition, Rehabilitation and Resettlement Act 2013. The Bill is being deliberated upon by a joint committee of Parliament chaired by BJP MP S S Ahluwalia.