Congress leaders point to the cyclic change in the party in power in the state every five years, even as the Congress fell to a record low of 21 seats in the 200-member assembly in the 2013 election.

By
Aman Sharma
, ET Bureau|
Last Updated: Nov 23, 2017, 01.41 AM IST
0Comments
JAIPUR: In politics, as in cinema, history is being invoked as well as hotly debated in the battlefield of Rajasthan a year ahead of the next assembly election, in which the Congress hopes to regain power while the incumbent BJP seeks to overcome both the pattern seen over the past two decades and discontent with the Vasundhara Raje government.

Congress leaders point to the cyclic change in the party in power in the state every five years, even as the Congress fell to a record low of 21 seats in the 200-member assembly in the 2013 election and lost on all 25 seats in the general election the next year. Coupled with what they claim is mounting disaffection with the Raje government, they say the party may be back in the saddle in 2018.

ET spoke to chiefs of both the Congress and the BJP in the state along with senior ministers in the Raje government to get a sense of preparations in the two camps ahead of the battle next year. “In 2013 we suffered our worst defeat since Independence in Rajasthan. Defeat is one thing, but being vanquished like that was another,” said Sachin Pilot, the Congress president in the state since 2014. “From that day, as I was given charge of the party here, I have put myself and party in Rajasthan in election mode. We decided not to wait for the dash of last 18 months,” said Pilot, who has been travelling across the state by road in an attempt to revive the party’s fortunes. 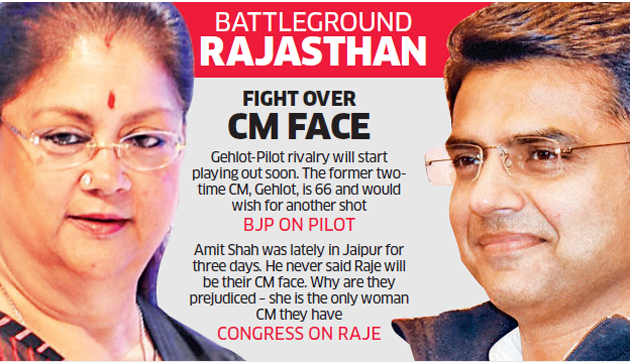 His counterpart in the BJP and a close aide of the chief minister, Ashok Parnami, dismissed Pilot’s “negative campaign” and said people acknowledge the government’s development work. “The Congress thought Ashok Gehlot was ineffective as CM for five years and the party’s performance dipped, so they brought in Pilot. Momentum is only built when you serve the people. Merely by going around the state like Pilot is, people are not going to get happy,” Parnami said.

Pilot, however, expressed confidence over his strategy. “Jo dikhega so bikega. Jo phiregi so chalegi (What is seen, sells. What moves, works). So we have moved around building our morale,” he said.

PILOT VS RAJE IN 2018?
Although neither of the two parties has declared its CM candidate, the next election might well be a contest between the 40-yearold Pilot and the 64-year-old, two-time CM Raje. For the moment, both camps are taking potshots at each other for not declaring a CM candidate.

“Gehlot-Pilot rivalry will start playing out soon. The former two-time CM is 66 and would wish for another shot,” said a senior minister, who did not wish to be identified. Pilot dismissed such suggestions. “BJP imagines a rivalry between us. Let BJP be happy in its fool’s paradise that there is a tussle which will benefit them – there is none and we are a united force. I am confident this is what Mr Gehlot would also say. AICC (All India Congress Committee) will take a call, if one, on CM face,” he said. He also asked why the BJP had not declared Raje as its CM face when it had done so in the case of Shivraj Singh Chouhan in Madhya Pradesh, Raman Singh in Chhattisgarh and BS Yedyurappa in Karnataka. “Amit Shah was lately in Jaipur for three days. He never said Raje will be their CM face. There is a deafening silence in the BJP over this question.

Why are they prejudiced – she is the only woman CM they have,” he said. A former senior state minister of Congress claimed that “Raje knows she will not be the choice for CM next time as the central leadership does not like her”. However, Parnami backed Raje. “She is popular as CM. Congress has done a misinformation campaign that she is inaccessible. She is more accessible than any other CM. Through ‘Sarkar Aapke Dwar (government on your doorsteps), she has toured the entire state. She is doing a three-day-long tour of each district now,” he said.

FARM LOAN WAIVER AND OTHER BIG ISSUES
While the BJP is extolling its development works such as record construction of roads, water storage and education (13 lakh new admissions), the Congress is questioning rising crimes against tribals and women as well as “PPP model of Raje” in outsourcing road, education and medical facilities to private hands. The biggest issue, however, seems to be the demand for a farm loan waiver, for which Pilot has taken out yatras in the state.

Pilot carried one such yatra in the CM’s home constituency that led Raje to announce a committee to study the feasibility of a loan waiver. “Eighty farmers have committed suicide. I am asking for farm loan waiver. If UP and Maharashtra CMs of BJP can do it, farmers in Rajasthan ask what crimes have we done,” he asked. “Has any state made a committee to decide on loan waiver? Did Yogi Adityanath or Devendra Fadnavis make a committee to decide so? Our governments in Punjab and Karnataka have done a loan waiver. Raje wants to buy time, do this closer to elections – that is petty politics. We know she will have to do it, but why make farmers wait a year. Do their lives don’t matter?” he asked.

Pilot said he has visited at least 60 families of farmers who have committed suicide while the state’s agriculture minister went on to say that there had been no farmer suicides in Rajasthan due to loans.

BJP state president Parnami said that the CM wants the committee to first study the loan waiver model of Maharashtra, UP, Karnataka and Kerala. “After that, the committee will conclude what is for the benefit of farmers. We have not said no to loan waiver. Two-three meetings of the committee have taken place – they have visited Kerala. Yes, UP and Maharashtra have done it – but what are the results so far? We want to give results to our farmers,” he said.

Parnami said that a long-term solution of doubling farmers’ income was already in operation. “Which is the party that sunk farmers in loan – it was the Congress. We are aiming to double farmers’ income and not let a situation be created where farmers come under the pressure of loans,” he said.

UPCOMING BY-ELECTIONS: THE SEMI-FINALS
Three by-elections expected in Rajasthan in January – for two Lok Sabha seats of Ajmer and Alwar, and an assembly seat – are now being seen as the semi-finals before the 2018 battle. Two young faces of the Congress and former union ministers, Pilot and Jitendra Singh, lost badly from Ajmer and Alwar seats respectively in 2014. “Let Pilot stand from his earlier seat of Ajmer and test his popularity.

If he does so, he will surely lose and the Congress campaign for 2018 will end before it even starts,” said the senior BJP minister cited earlier.

Pilot said, though, that the pressure is on the BJP ahead of the bypolls. “I have been MP from Ajmer – who would not like to be in Parliament? I have lost there – I would like to erase that. If the party so desires, I will fight. But my responsibility is also that the party wins all these three bypolls. They are all BJP seats so the pressure is on them,” he said. Raje is putting in a lot of effort for the bypolls.

She has repeatedly toured Ajmer and Alwar – she was in Alwar on Wednesday too, making announcements about new projects and schemes. Parnami said that during a byelection earlier this year on Dholpur seat, Pilot had said it would decide how Raje government was faring. “Dholpur was always a Congress seat. People there were so angry with the Congress that we won by more than 37,000 votes. So people of Rajasthan have already given their mandate,” he said. Pilot, on the other hand, said that Dholpur was more of a state government’s win given the misuse of state resources by the BJP. “The BSP MLA there was disqualified after a conviction. Raje overnight inducted his wife into the BJP and gave her a ticket from Dholpur.

That is how much confidence Raje had in the BJP organisation,” he said, pointing out that the Congress has won three out of five byelections in Rajasthan since 2014.

THE CONTROVERSIES
Although the BJP accuses the Congress of a “negative campaign”, controversies over a draconian ordinance to protect officials in corruption cases or an alleged mining scam have dented the government’s image.

“I don’t mind the frustration the BJP has because I catch them with their hand in the till,” Pilot said. “A year ago, we unearthed the mining scam where one lakh bighas of land was allocated on first come, first served basis hours before the deadline was to end. Six days after I caught them, they cancelled the allotment and gave the matter to the Lokayukta, where it is still pending.”

The recent ordinance got the state government a lot of flak too over its provisions prohibiting media coverage. Parnami said that the Raje government was alive to the criticism. “As soon as negativity came around this ordinance, the CM immediately transferred this ordinance to a committee which has both ruling party and opposition members. We did not push the law through, even though we had a majority in the assembly,” he said.

A leading newspaper of the state, Rajasthan Patrika, decided not to cover any of the government’s activities till the ordinance was withdrawn. The apparent inaction against Sri Rajput Karni Sena from the state government during protests against Padmavati and cases of lynching over alleged cow smuggling have also put the state’s law and order mechanism under the scanner.

Nonetheless, BJP leaders exude confidence. “Even in 2008, when the Congress last won, it was not Raje who lost. It were the rebels inside BJP who damaged us by fielding themselves on 42 seats. We could not pacify them. But we still won 78 out of 200 seats in 2008. 2018 we will break the cyclic pattern,” Parnami said.

Pilot, on the other hand, said that some BJP legislators in the state voted for Congress candidates both in the presidential and Rajya Sabha elections. “We are making the BJP sweat,” he said.

A game is on in Jaipur.
Read more on
Congress
Padmavati
BJP
Vasundhara Raje
Rajasthan

Congress to hold online agitation on May 28 for poor