At present, there is no flight from the state capital Lucknow to PM Modi’s Lok Sabha constituency Varanasi or Gorakhpur — CM Adityanath’s constituency — or vice versa.

By
Aman Sharma
, ET Bureau|
Updated: Aug 21, 2017, 12.53 AM IST
0Comments
NEW DELHI: The Yogi Adityanath government has decided to roll out the red carpet for airline operators, proposing a mega incentive policy for any airline that is ready to offer direct air connectivity between the state’s three prominent centres — Lucknow, Varanasi and Gorakhpur.

At present, there is no flight from the state capital Lucknow to PM Modi’s Lok Sabha constituency Varanasi or Gorakhpur — CM Adityanath’s constituency — or vice versa. Any person wishing to fly between these three destinations, which incidentally have fully functional airports, has to fly first to Delhi.

Varanasi and Lucknow are even international airports. The BJP led government in UP is now set to correct this regional anomaly in the state’s air connectivity by offering incentives to attract airlines.

As per the draft State Civil Aviation Promotion Policy of UP 2017, reviewed by ET, the state has proposed to reimburse its state GST share on tickets to the first airline which offers inter-connectivity on a route between these centres. 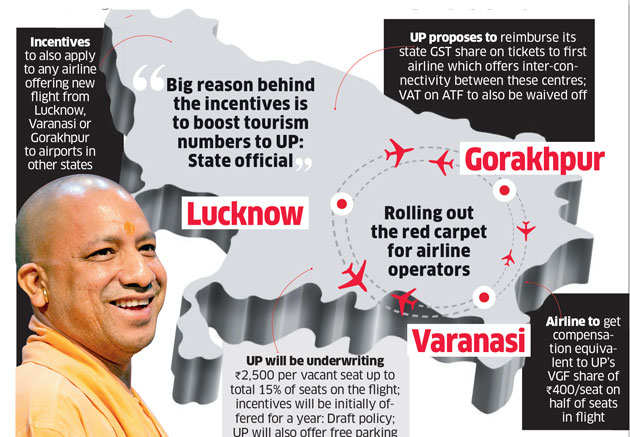 The VAT on air turbine fuel (ATF) for these routes will also be waived off by UP. The airline will also get compensation equivalent to the state’s viability gap funding (VGF) share of Rs 400 per seat on half of the seats in the flight and UP will be underwriting Rs 2,500 per vacant seat up to total 15 per cent of seats on the flight.

These incentives will be “initially” offered for a year, the draft policy has proposed. The first two incentives— SGST reimbursement and VAT waiver — will also apply to any airline offering a new direct flight from Lucknow, Varanasi or Gorakhpur to major airports in other states.

Right now, there is a flight from Lucknow to Mumbai, Kolkata, Patna, Delhi, Dehradun, Bengaluru and Bhopal and from Varanasi to some of these centres. UP wants more centres to be connected and is bringing a new policy as there is no comprehensive state civil aviation policy in UP so far.

The state government has found that while passenger air traffic in UP grew in 2016-17 by 26 per cent to 4.2 million passengers, it was still a pittance compared to its nearly 20 crore population.

UP has also recently got clearance from the Centre for development of an international airport at Jewar in Greater NOIDA on the PPP mode. The new policy is proposing incentives of similar nature but for bigger duration to airlines ready to connect its unserved and under-served airstrips like Agra, Allahabad, Meerut, Jhansi, Kanpur, Faizabad, Bareilly and Aligarh, which may be included by the Centre in its Regional Connectivity Scheme. UP also proposes to waive off its SGST share and underwrite 50 per cent of vacant seats for three years on RCS connecting flights.
Read more on
Regional airline connectivity for Uttar Pradesh
air turbine fuel
State Civil Aviation Promotion Policy
viability gap funding
Yogi Adityanath

2 days after Yogi Adityanath's warning, UP seals assets of ‘rioters’