“Police ka iqbal buland ho (police morale must be high) – this is the message. If anyone uses firepower on us, we will reply with necessary force,” Sharma, SP, Shamli, said.

NEW DELHI: Six hardened criminals have been gunned down in encounters with UP police in the past three weeks, signalling a new tough stance of the Yogi Adityanath government.

The BJP government has been facing flak over law and order since Adityanath took charge as chief minister in March. However, nearly 750 wanted criminals have been arrested in the state since April, according to state police officials. The biggest message has been sent by the recent encounters, they said.

All five encounters since July 29, accounting for six killings, have taken place in sensitive districts of the state, namely Shamli, Azamgarh and Muzaffarnagar. "This is symptomatic of an aggressive campaign of the police under the able directions of the CM to have a proactive, reinvograted drive against hardened criminals. If a criminal thinks he can fire at police and escape, he is under a misconception. At least 20 of my men have also got bullet injuries. We want to use minimum force. Encounters are never planned," UPs additional DG (Law & Order) Anand Kumar told ET.

Ajay Pal Sharma, the superintendent of police of Shamli, leads the way so far with two encounters that have led to three criminals being shot dead. The series of encounters started with Sharma’s team gunning down two wanted criminals, Naushad and Sarvar, on the night of July 29. On August 11, his team shot dead another criminal. “Police ka iqbal buland ho (police morale must be high) – this is the message. If anyone uses firepower on us, we will reply with necessary force,” Sharma said. 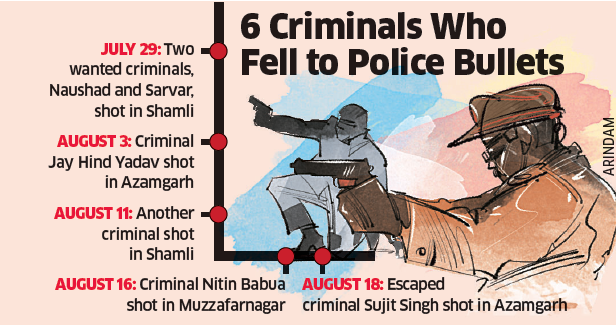 But there is no strategic decision to kill, according to Sharma. “Ten days ago, I was shot at by a wanted criminal and was injured. But we arrested that person without shooting at him. We have nabbed 10 criminals after encounters in which they were injured but their lives were saved as they were rushed to hospital. In the August 11 encounter, we had shot at the criminal below his knees but he died due to blood loss and shock,” he said.

Close in Sharma’s range is the police chief of Azamgarh, Ajay Sahni. A criminal named Sujit Singh, who escaped from a court hearing on August 11, was shot dead in Azamgarh a week later by Sahni’s team. On August 3, his team had killed another wanted criminal, Jay Hind Yadav. On August 16, the Muzaffarangar police under SSP Anant Tiwari shot dead hardened criminal Nitin Babua. Villagers had lifted him on their shoulders, hailing him for the encounter.

“There have been eight honour ceremonies by locals for our team since the July 29 encounter. People are elated,” said the Shamli SP, who was taken out on a chariot by locals around the town to felicitate him. He said an industrialist named Anuj Bansal was earlier reluctant to set up a factory in Shamli due to the crime situation but had now agreed to put up one. Sharma said, “It will be bringing employment to 1,200 people.”
Read more on
Azamgarh police
Ajay Sahni
Muzaffarangar police
Anand Kumar
UP police
BJP government
Comments
Add Your Comments
Commenting feature is disabled in your country/region.