Sri Lanka may have switched to Plan B, but early indications were that this may not do much to change the result of the game.

There are days when the best laid plans don’t bear fruit, simply because the opposition was too good, fortune turned her face away or simply because a team was not good enough to get the job done. Sri Lanka, having been smothered by India’s batting in Galle, hoped for turn, searched for bounce and prayed for mistakes in Colombo, but India’s batting was once again simply too strong.

On a pitch that was more bald than Ben Kingsley, Sri Lanka chose to play three spinners, with Nuwan Pradeep being the only man operating off a long run. Rangana Herath had the off spin of Dilruwan Perera and the leftarm orthodox of Malinda Pushpakumara, making his debut after 99 first class matches, for company but even as they wheeled away throughout the day, there were little returns to show for the effort they put in.

India began brightly, Shikhar Dhawan and KL Rahul going at a fast clip, ensuring that the hard new ball was put away for as many runs as possible in case the going got tough later. Dhawan, perhaps in too good nick following his 190 in the first Test, played a hard sweep at Perera early on, and when he failed to make contact with the ball was plumb in front. 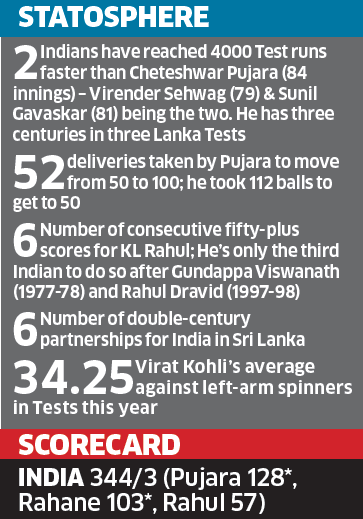 Cheteshwar Pujara, playing in his 50th Test, joined Rahul out in the middle and India dominated. Sri Lanka made the mistake of allowing Pujara to play to his strength, which is the leg side, and Rahul’s hunger at playing Test cricket after months out due to a shoulder surgery put him in a great mental space to cash in.

While Rahul was light on his feet and timing the ball superbly, a crisp hit over long-off for six the highlight of his stay at the crease, Pujara was solid, and used the depth of the crease to make the most go his back-foot strength. Rahul (57) looked good to break his run of half-centuries — he came into the game with six from his last seven innings — when a communication breakdown left him stranded. Tapping the ball to the off side with soft hands, Rahul pushed for the single. Pujara appeared to respond, but changed his mind and the run out gave Sri Lanka the pick-up they needed.

Rahul was clearly disappointed, and rightly so, for it was not merely his call, but there was certainly a run on offer if the batsmen had not hesitated. Pujara is not the kind of cricketer who needs added motivation, but having played a hand in his partner’s run out, he seemed ever more determined to make a big score, some further skittish running notwithstanding.

For a brief period before the lunch interval, the ball began to rear from a length and grip the surface and turn appreciably. But, soon after the break as the ball softened, there was less bite for the bowlers and it was time to cash in. Kohli (13) was positive from the word go, perhaps a touch too much, and made the mistake of sitting back to cut a delivery from Herath that was a touch too full for the shot.

The flashing edge was well caught at slip and India were in a spot of bother at 133 for 3.

From there on, however, it became clearer than ever that this was going to be India’s day. Pujara and Ajinkya Rahane put on an unbeaten 211-run stand for the fourth wicket, both helping themselves to centuries as Sri Lanka wilted in the field. Pradeep, the lone fast bowler, hobbled off the park just as the second new ball was due leaving the spinners to do all the work with the pitch not being as helpful as they would have hoped.

Pujara brought up his 13th Test hundred and Rahane his 9th, leaving Dinesh Chandimal tearing his hair out and wondering where the next wicket might come from. Most teams look at a pitch carefully and then decide their bowling line-up. Here it seemed to be a case of Sri Lanka deciding what they wanted — a rank turner— and picking a team on that basis, rather than on how the pitch looked on the morning of the game. With India having reached 344 for 3, Pujara bedding in for the long haul with 128 and Rahane set to take fresh guard on the second day on 103, the bowlers are in for a hard slog.

Sri Lanka may have switched to Plan B, but early indications were that this may not do much to change the result of the game.
(Disclaimer: The opinions expressed in this column are that of the writer. The facts and opinions expressed here do not reflect the views of www.economictimes.com.)
Read more on
India Sri Lanka
Dinesh Industries
Shikhar Dhawan
Ajinkya Rahane
Cheteshwar Pujara
Rangana Herath
Comments
Add Your Comments
Commenting feature is disabled in your country/region.