After the government announced the demonetisation move on November 8, many people have been pushed to opt for digital means of transactions with companies reporting an across-the-board surge in new sign-up both in terms of users as well as businesses accepting digital payments.

NEW DELHI: The demonetisation exercise is expected to bring a significant number of people into the formal economy due to their forced usage of electronic modes of transaction, which will create a new user base for many services. According to experts, once people start using electronic transactions, the data generated on them can be used to offer goods and services on EMIs, insurance products or even soft loans. This in the long run will help several sections of companies in tapping new users.

"If you look at any business right now, they are focused on the top 45-50 million households. There are another 100 million more households with 500-million people who are expected to spend around trillion dollars in the next few years, but they are not part of the formal economy," said Sharad Sharma, cofounder of iSPIRT, a think tank and a lobby group for startups. He added that out of these 100-million households, very few of them have insurance or some formal credit. 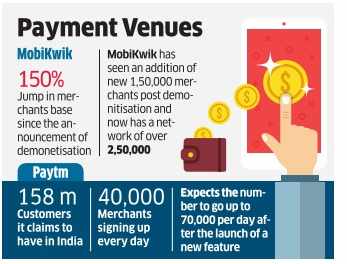 "It is likely that new consumption patterns will emerge since now companies will have data on these people which can help them to get credit or insurance or other services." Sharma added that the current demonetisation will accelerate financial inclusion further.

After the government announced the demonetisation move on November 8, residents of the country have been pushed to opt for digital means of transactions. While existing users have increased their transactions through debit-credit cards or wallets, companies are reporting an across-the-board surge in new sign-up both in terms of users as well as businesses accepting digital payments.

Neel Ratan, executive director at audit and consultancy firm PwC said that while government had worked hard to open bank accounts of everyone, the number of transactions happening was still less. "The long term benefit of demonetisation will be of getting more people into the digital payment mode. Therefore, over a period of time it will be easier for both businesses and governments to identify and target more correctly what services they could get, to me this is the largest benefit." He added that the move will speed up financial inclusion along with helping both the private sector as well as governments.

Digital payments firm Paytm, which claims to have over 158-million customers in India, said on Wednesday that close to 40,000 merchants are signing up on its platform every day and they expect the number to further go up to 70,000 per day after the launch of a new feature which enables people to pay through their debit or credit card to a merchant accepting Paytm.
Read more on
PwC
PayTM
iSpirt
demonetisation
Note ban

Will not let nation forget or forgive the 'Tughlaqi blunder': Sonia hits out on notes ban