"Success is about making a positive impact. I am an engineer by chance, teacher by choice and an entrepreneur by chance. I did not start this to make money."

By
J Vignesh
, ET Bureau|
Apr 13, 2016, 04.00 AM IST
0Comments
BENGALURU: From the sun-soaked days spent running and playing football and cricket at Azhikode, Kerala, Byju Raveendran learned one thing: Do what you love with all your heart. He follows the same mantra while leading a company that recently secured $75 million (about Rs 500 crore) in funding from Sequoia Capital and Belgium-based Sofina.

"Success is about making a positive impact. I am an engineer by chance, teacher by choice and an entrepreneur by chance. I did not start this to make money. I started doing what I really loved, it made an impact and became a business," said the founder of the namesake education technology startup, Byju’s. For the son of two teachers, numbers were always close to his heart. "I was able to relate to everything through numbers. During my school days, I remember sitting in a train and trying to figure out the speed of the train by keeping a track of the number of electric poles and the time," said Raveendran. He started teaching because he knew how to crack the much-feared CAT exam. The trick, according to the 35-year-old, is simple — learn the how and why of the question. "The idea is to make learning contextual and visual. It is important to show the how to learn." 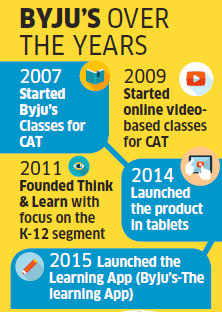 The "how" was instrumental in scoring 100 percentile in CAT and in focusing on teaching the same to other aspirants. "I was working abroad, as a service engineer. It involved a lot of travel. The exposure increased my aspirational levels," said Raveendran.

"During my break, I took CAT and scored 100 percentile. After that, I started with just a few workshops on how to make sense of questions rather than solving a question. Then, classrooms got converted to auditoriums and then into stadiums."

Integral to running Byju’s is his personal learning from sports. From football and cricket to badminton, table tennis and ball badminton, Raveendran plays them all. "How to handle pressure, team work, that killer instinct, these are the core messages from sports," said the FC Barcelona fan. In the long run, he wants to make quality education accessible to a large audience, and has hence relied on technology to do it.

"What they (Byju’s) did well was video-based learning, and their mobile app, this has been a big success. They also got their fundamentals right, they got the right teachers," said Narayanan Ramaswamy, head of education practice at KPMG India.

"Byju is a brilliant person. He has great conceptual clarity. He has built a pedagogy on basic principles as building blocks. He understands the role of tech in learning. He knows how to grow an organisation," said TV Mohandas Pai, chairman of Manipal Global Education and an early investor in Byju’s. "He has enormous passion and energy. We invested Rs 50 crore at a valuation of Rs 150 crore. It was a large leap of faith. He’s possibly the foremost entrepreneur in edtech in India."
Read more on
Sports
FC Barcelona
Badminton
KPMG
education technology
Sequoia
Byju Raveendran
Byju’s

Why Byju Raveendran named his start-up after him: No, it wasn't vanity or narcissism