Companies across industries want to be seen as swipe-right worthy.

By
Delshad Irani
, ET Bureau|
Last Updated: May 04, 2016, 05.19 AM IST
0Comments
Jitters, sweaty palms, dry mouth and a God-awful feeling in the pit of one's stomach. First date or job interview? For a lot of people the physiological response to a maiden romantic rendezvous and an important job interview is much the same. Now Dentsu-owned mobile marketing agency, Fetch, has obliterated already blurred lines. The agency hired an intern through location-based dating app, Tinder, which, in its home market at least, is more a hook-up app than the dinner-and-a-movie kind. Nevertheless, after a fair bit of swiping the NYheadquartered Fetch found a match.

Here's how it all went down. Fetch created a Tinder profile in January to find matches in New York City. The agency asked potential candidates for their best pick-up lines. None of that "I'm not Fred Flintstone but I can make a bed rock” would do. Fetch matched with 270 potential candidates. It whittled down to 5 in-person interviews.

Every day for three weeks account director Kayvon Mesbah would spend 30 minutes to an hour swiping and chatting with people. The winning line: "Hey Fetch! If I was as good at dating as I am at marketing, my thumbs wouldn't be sore from Tinder!” Meet Fetch's "Tintern” 22-year-old Sam Weidt. (See photo of Weidt doing a crucial intern job – fetching coffee.)

Weidt, whose initial reaction was ‘Oh man, are you kidding? Who names their kid Fetch?', says about his experience; "Looking back, I loved this kind of recruitment because it was low pressure. Walking into the interview, I knew they had seen my Tinder profile; that's about as vulnerable as you can get.” 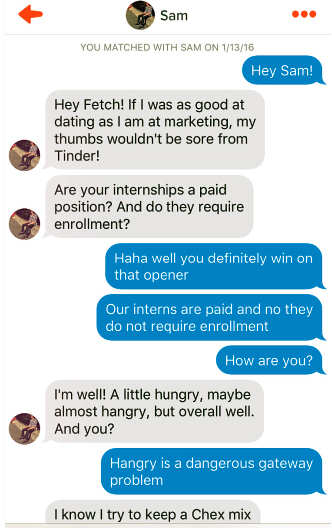 Last month, ad agency Droga5 looked for interns via an Instagram competition. The brief: Use the colours blue and orange to show how you would free yourself of a creative block. Droga5 started its coveted internship program in 2015. But the program had to evolve said the agency founded by advertising's rock star, David Droga. So they spoke with past interns and based on their collective experiences stumbled upon a seemingly obvious insight. An agency spokesperson tells BE, "We landed on a key finding that would end up being the theme of this year's program: interns want an opportunity to be recognised. We based this year's application process and program around a competition theme, "Apply Yourself," but wanted to take it a step further by incorporating a surprise element involving our Instagram channel (@droga5): the #D5Extra Challenge."

The agency used Instagram because of the photo-sharing app's visual strengths; "What's great about social media is that each tool is a medium for expression. We went with Instagram because it forces users to communicate visually first. The #D5Extra Challenge allowed us a way to vet talent beyond just a portfolio and interview and identify the kind of intern talent we want to uncover." The winners will be announced on 9th May.

JWT India's Bodhisatwa Dasgupta had similar reasons for interviewing potential recruits on a WhatsApp group. Every year, Dasgupta would get calls from collegians from institutes like St. Xavier's in Mumbai. But restricted by geography and an acute lack of selfawareness among the hopefuls, Dasgupta was left with rookies who weren't even sure advertising was the right career for them. So he turned to WhatsApp and gave 6 candidates a copy test fit for the digital age: create a meme. He also asked them to record ‘radio spots' using the voicemessage feature in WhatsApp. Judging not just their creativity but how fast they can deliver. Dasgupta admits he's a slave to his whims so repeating the process is unlikely. But next time it could be Periscope interviews. How effective was the exercise? While 3 out of 6 dropped out half way through the chat, three are currently full-time adwallahs working with JWT and Dentsu. And, according to Dasgupta, there was even some interest from JWT's HR department, which, it seems, is not closed to a WhatsApp interview model.

Not just ad agencies, which are notorious for pushing the boundaries of absurdity anyway, are swiping to hire. JPMorgan, one of the world's biggest financial organisation wants to be more hip. Banks need to be more appealing to younger millennials bred on tech and self-destructing messages, people who generally make a beeline for the likes of Google and their quinoa breakfast cereal. So JPMorgan and its ilk must go to platforms like instant-messaging app and social media darling, Snapchat. The company is using geo-filters on Snapchat to find and hire freshers. Goldman Sachs's Snapchatbased hiring campaign includes a series ‘Career Stories' like App Developer, Game Coder, Crowd Funding Champion and Campus Environmental Leader. ‘Hipsters May Apply'.

However, not everyone is keen on these recruitment methods. A senior recruiter with Accenture tells us, "Companies are doing anything and everything possible to get themselves heard in the market by adopting the latest "cool" methods." But it's purely for branding and advertising purposes that companies adopt such strategies. "From the final outcome of hiring people using these strategies, the effort to output ratio is skewed." These apps don't capture any educational and work experience, etc of candidates, so a recruiter would end up investing a lot of time on each profile before even understanding their fitment. Snapchat, Whatsapp, Tinder, etc, for now, have restrictive use. Almost ideal for entry-level personnel and for startups who don't have the wherewithal. But impractical for, say, hiring or attracting someone from a finance background or SAP background or some mid-level sales person.

Having said that, the fact is companies across industries want to be seen as swipe-right worthy. In a recent post on Linkedin, the group president HR at Essar Group, Adil Malia wrote about the need to think outside the box; "Talent search often fails not because there is shortage of talent in the market but more often than not by deficiencies in the search process adopted by the TA team… Generally, it is a mindless continuation of the old ways. How then in the new volatile and demanding markets do we imagine to succeed with such shoddy and outdated practices? Talent search is a serious activity and it demands dynamic attention."

The question is are Tinder and Snapchat the answer? Think before swiping.
Comments
Add Your Comments
Commenting feature is disabled in your country/region.