The attempt has come under fire for being misleading and net neutrality advocates have said Facebook is using its market dominance to push Free Basics in India.

NEW DELHI: The net neutrality debate is heating up again in India, with savetheinternet. in — the volunteer-led group that mobilised over one million responses supporting net neutrality possible earlier in the year- launching a renewed effort against Facebook’s recent push to “Save Free Basics”.

About a week ago, Facebook launched its "Save Free Basics" campaign on the social network, in an attempt to promote its Free Basics programme, which the social networking giant says is a part of its internet.org initiative. It is urging users in India to show support for "digital equality" in India, in response to a paper by the telecom regulator which is seeking comments on differential pricing practices such as Airtel Zero or Free Basics.

The attempt has come under fire for being misleading and net neutrality advocates have said Facebook is using its market dominance to push the net neutrality-violating Free Basics in India.

"The question you have to ask is, if they are spending this much of money, what do they have to gain from it?" asked Nikhil Pahwa, founder of online portal Medianama, who has been instrumental in bringing net neutrality to the fore in India. In addition to its online campaign, Facebook has also been running advertisements in newspapers across the country, on television, in cinema halls and outdoor hoardings. 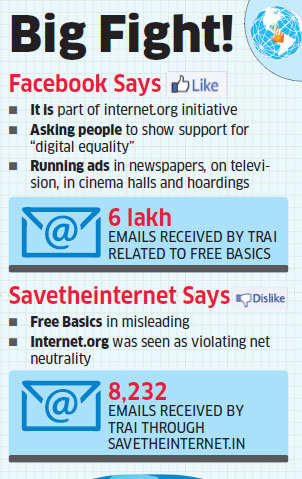 While there is no estimate of how much Facebook has spent on advertising Free Basics in India, Pahwa said it could be close to $20 million.

Facebook however, denied these allegations. "Facebook makes no money, and runs no ads on Facebook in Free Basics. Free Basics is about providing internet access for the unconnected – and it is succeeding," it said in an email response to ET.

Net neutrality, or the notion that internet service providers must treat all traffic as equal, became a topic of heated discussion after Telecom Regulatory Authority of India floated a consultation paper on "Regulatory Framework for Over-the-Top (OTT) Services" in April.

People on the other side allege that Internet. org could be violating net neutrality because it seeks to provide preferential access to Facebook and some other websites.

While savetheinternet.in garnered over 1.5 million emails in April, it does not see itself reaching that number this time around. "The thing is it is very difficult for us to get that kind of mobilisation once again, like we got earlier. But we are going to try," said Mishi Choudhary, legal director at the Software Freedom Law Centre, and one of the volunteers of the savetheinternet. in.

Savetheinternet.in acknowledged that they cannot match up to Facebook "exploiting" it’s over 130 million user base in India, but is still trying to increase the numbers in support of net neutrality.

According to Bulletin Babu, aTwitter account which is updating number of emails sent to TRAI in support of net neutrality, 8,232 emails had been sent through savetheinternet. in until the time of going to print, while an agency report had said on Monday that TRAI had received around 6 lakh emails related to Free Basics in response to its paper on differential pricing.

US appeals court will not reconsider net neutrality repeal ruling

Rolling back net neutrality can spur investments in economies like India: Ajit Pai