The company said it could report revenue between $1.81 bn and $1.84 bn in the seasonally weak December quarter, reflecting sequential growth of 2-4%.

The management, however, painted a rosy future, saying that the company is nearing the end of a more than three-year-long turnaround process and should soon be able to report over 3% growth in sequential revenue. Wipro’s quarter-on-quarter revenue growth hasn’t crossed the mark since the three months through September 2012, when it reported a 4.6% expansion, even as its close rivals in the information technology sector outpaced it. Analysts say the Bangalore company is still far from achieving 3% sequential revenue growth and sustain it. 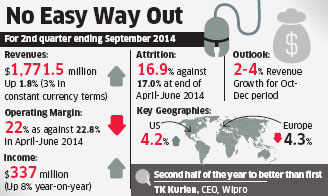 or the July-September quarter, Wipro posted a net profit of Rs 2,084.8 crore. Analysts, on average, were expecting Rs 2,109 crore, according to Thomson Reuters. Total revenue rose 8% from a year earlier to Rs11,683 crore. In dollar terms, its IT services revenue was $1.77 billion, up 1.8% from the April-June quarter and against its prediction for 1.7-4.1% growth.

The company said it could report revenue between $1.81 billion and $1.84 billion in the seasonally weak December quarter, reflecting sequential growth of 2-4%.

Earlier this month, rivals Infosys and Tata Consultancy Services reported sequential revenue growth of 3.1% and 6.4%, respectively, indicating that the growth momentum has returned to India’s over $100-billion IT sector. Wipro executives too sounded optimistic in their comments.

The company’s revenue from North America increased 11.2% from a year before, it said. Its business from India, which grew 3.1% sequentially during the September quarter, too showed signs of improvement. “We are seeing positive sentiments in India with the confidence that the government is focused on driving an agenda for growth,” Premji added.

TK Kurien, the Wipro CEO who took over in February 2011, said the earnings and the progress so far were “a mixed bag”.

“Dispassionately speaking, what we have brought is aggression and cohesion — there will be no change in strategy; now it’s about execution,” said Kurien.

Indeed, since he took over, Kurien has brought down complex and overlapping structures within Wipro and given more freedom to his next set of leaders for making faster decisions. All that has helped the company improve its positioning and prospects in pockets — a proof is its healthcare and life sciences unit, which grew over 20% in the September quarter.

But its tepid sequential growth is a concern.

Rivals Cognizant Technology Solutions and TCS have been growing at double the pace, widening the revenue gap. Infosys, too, has reassured investors of returning to industryleading growth rates soon, after Vishal Sikka joined as the its first non-founder CEO earlier this year.

Worryingly, Wipro believes it expects some “headwinds” in a few of its largest clients to continue until the end of 2014.

“This quarter (July-September) has been poor and far from industry standards,” technology research firm Greyhound Research wrote in a note on the company’s results. “Their business continues to be a well-balanced portfolio between Infrastructure and application services, but BPO, product engineering and ADM (application, development and maintenance) continue to decline.”

The management expects revenue growth to pick up momentum soon.

“Overall we are more positive now than a few quarters back and if we get over this quarter with a few accounts over which we have issues around, we will get back to the growth path,” said chief financial officer Suresh Senapaty. “ýYes, we have arrived at the stage where we can have 3-4% sequential growth.”

Nonetheless, analysts maintain that a quarterly guidance of 2-4% for the coming quarter underscores that the company’s turnaround is still a few quarters away. “This turnaround continues to be a work in progress,” said a Mumbai-based analyst at a domestic brokerage. “We are not that bullish on any complete recovery for at least another twothree quarters.”

To his credit, Kurien’s strategy of aggressively chasing large deals seems to be paying off, though in parts. The company now has 10 customers giving it over $100 million in revenue each annually.