“We have the policy in place, we have the money, but people are not coming forward,” said another official who also requested anonymity.

NEW DELHI:India’s ambitious plan to develop a back-office hub in the northeast is turning into a flop show, with the government failing to garner any interest for its Business Process Outsourcing (BPO) promotion scheme in the region even after relaxing qualification norms and giving companies more time to bid. The government is now considering fresh changes to the policy, aimed at boosting employment.

The department of electronics and IT received only one application to fill 300 of the proposed 3,000 seats during the first round of bidding – from Kolkata-based IKF Technologies – and decided to rework the policy document hoping for more interest the second time around. According to two government officials privy to the development, the response was muted even the second time.

“We have received just one bid from a local player for 200 seats, which is also not materialising for lack of paperwork,” said an official who did not wish to be identified. Despite the incentives and relaxation in norms, companies say it doesn’t make economic sense to invest in the northeast as the region is marred with inadequate civil infrastructure, poor connectivity and security-related issues. “We have the policy in place, we have the money, but people are not coming forward,” said another official who also requested anonymity.

ET was the first to report on September 8 that the government had received only one bid under the scheme and is reworking the policy.

The policy is aimed at creating employment opportunities in the northeast, which has a robust pool of English-speaking youth. 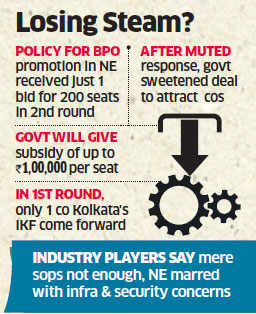 The government will provide support in the form of funding of up to Rs 1 lakh for every seat. The outlay for the scheme is Rs 50 crore and it comes in the backdrop of a nationwide BPO scheme, which has an outlay of about Rs 500 crore and is aimed at creating employment opportunities for about 1.5 lakh people in tier-II and III cities. The officials said the government is far from giving up and is considering fresh changes to the policy.

“There are various iterations being considered,” said an official. While nothing is official now, one way to fill the seats is to remove the cap on the number of seats and the turnover of companies, the person added. The turnover norm could be relaxed to less than Rs 1 crore from Rs 5-10 crore and the threshold for minimum number of seats from 100 to about 50.

“Our goal is not to attract big companies or small firms – the goal is to give employment,” the official added

Relaxing eligibility norms like capital requirements, track record of profits and allowing wider participation from other non-metros may shore up entrepreneur interest in BPOs in the Northeast. Supply-side issues need to be addressed. Attrition rates in BPOs tend to be high and what’s needed is ready availability of trainable team members, not just voice BPOs. To boost industry presence, managerial talent is vital. It may make sense to initially focus on one or two high-potential centres rather than target the entire northeast.
Read more on
Kolkata
IT
Funding
North East BPO
Comments
Add Your Comments
Commenting feature is disabled in your country/region.