NEW DELHI: India’s information technology industry is projected to clock revenue of $225 billion by 2020 and $350 billion by 2025 as digital and cloud technologies redefine the contours of products and services, the National Association of Software and Services Companies said.

The forecast for 2020 is $75 billion short of an earlier estimate of $300 billion made in 2013. Nasscom officials said the projections have not been “scaled down” and are below the $300 billion mark because revenue from ecommerce has been excluded.

Consultancy firm McKinsey & Co. India, which partnered in the study, said the $300 billion target was the aggressive end of the projection, while the base level was $175 billion and $225 billion is the more realistic figure. However, the numbers could reflect the churn caused by emerging digital and cloud technologies that are disrupting traditional businesses. 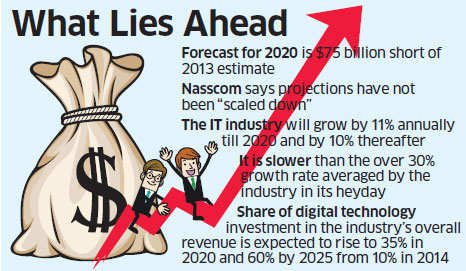 “The journey ahead is both exciting and terrifying,” said Noshir Kaka, managing director of McKinsey & Co. India. “We don’t know what lies ahead in terms of opportunities and challenges,” he added.

Nasscom chairman BVR Mohan Reddy said the highlight of these numbers is that the service mix is changing significantly towards digitalisation. “Data will become more and more important as we go forward and we will have to resize and rebrand ourselves,” he said.

The numbers signify the industry will grow by 11% annually till 2020 and by 10% thereafter, slower than the over 30% growth rate averaged by the industry in its heyday. The changing contours of the sector are also reflected in estimates of jobs added in the previous and current financial years. The number is expected to remain flat at 2,30,000 people.

“New opportunities are rising rapidly but there would be some service areas which would not grow as fast. Businesses are changing, there is far more digital stuff now,” said Som Mittal, former president of Nasscom. Ashank Desai, founder and former chairman of Mastek, said stagnation in the addition of headcount is due to the mix of services, which is changing productivity calculations in the long term, with the industry moving towards non-linear growth.

According to the report titled Perspective 2025: Shaping the Digital Revolution, about 80% of incremental expenditure would be driven by digital technologies including platforms, cloudbased applications, big data analytics, mobile systems, social media and cyber security. Half of this incremental investment will be funded by a projected 20 to 25% cut in legacy expenditure, which will be largely in infrastructure, traditional application development and packaged software.
Read more on
Nasscom
digital technology
cyber security
McKinsey & Co
cloud technologies
digital revolution
Ecommerce

Nasscom was 3rd biggest tech lobbyist in US in 2019