UEFA Euro 2016: What sets it apart from FIFA World Cup

According to UEFA, 150 million spectators are expected to follow each game live. 300 million will tune in for the final.

By
Delshad Irani
, ET Bureau|
Last Updated: Jun 15, 2016, 10.24 AM IST
0Comments
On Facebook, between May 1 and June 2, 2016, 84 million people had 221 million interactions around the UEFA Euro 2016. There are over 650 million sport fans on Facebook. They talk about players and teams; most popular subjects of discourse are Cristiano Ronaldo and France. National teams like Belgium are drumming up more support by having their players take part in live Q&As with fans through Facebook Live. Germany and Italy are giving fans a peek into training sessions. Portugal is giving us an inside look at their warm up games on Facebook. And fans can also tweet to light up the Eifel Tower in the colours of their team by sending tweets with special tags. Parisians probably hate it, but for a fan sitting thousands of miles away the sight’s sure to give them a few kicks. The question is what are brands doing to get a piece of the action at the biggest UEFA Euro ever?

According to UEFA, 150 million spectators are expected to follow each game live. 300 million will tune in for the final. But they won’t just watch and experience the games on the telly. Football is a community sport — watching matches with one’s mates at home or in a bar, collectively screaming at the manager for silly substitutions, having heated discussions on who’s better Ronaldo or Messi? In the digital age, a lot of these shared experiences happen online, on social media platforms and on mobile. The all powerful second screen. Just like the last FIFA World Cup which was the first truly social world cup, UEFA Euro 2016 is the first social European Championship. A fact not lost on the biggest sponsors and advertisers. 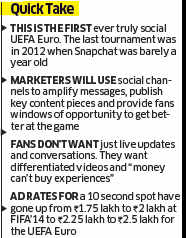 Marketing at the Euro is fundamentally different from the World Cup. While the latter has a wider audience, the Euro is more restricted and interest levels build up towards the end of the tournament. So that doesn’t help matters either. Says Damyant Singh Khanoria, brand director at Adidas India, “At the world cup one employs machine gun philosophy. For the Euro it’s sniper approach.” Hardcore fans and football enthusiasts are Adidas’ priority. The brand is using geotargeting to connect fans with content around the brand’s biggest assets like the match ball Beau Jeu, Zinedine Zidane, teams like Germany and Spain (Adidas sponsors 9 out of 24 teams) and players like Mesut Ozil. 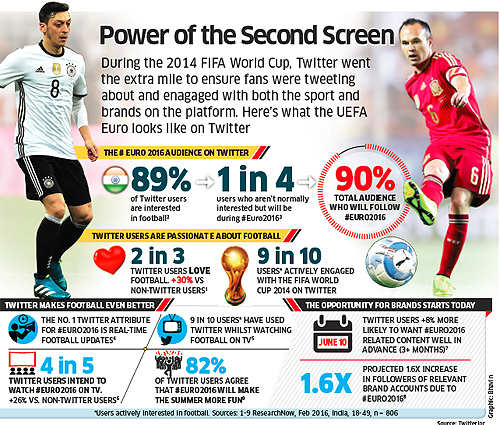 Videos, GIFs, player interviews, hero films on select players and real-time reactions are key content formats. For instance, says Khanoria, “If Ozil scores a goal, we know that there are a lot of Arsenal fans in India and he plays for Arenal, so content around that will be ampli f ied.” Aneesh Madani, head of sports partnerships, Twitter India, believes this year the theme is live differentiated video. For instance, when team Belgium left for France they used Periscope to take fans on the journey with them. Just live updates and conversations aren’t enough, people want access to photos, highlight videos in the moment and emojis! Says Madani, “Fans have never had that kind of ancillary complementary experience.”

Rajat Mehta, senior president & country head, brand, digital & retail marketing, Yes Bank, believes that a large part of marketing efforts will play out on the social media. Companies like Yes Bank, Honda, Micromax, Carlsberg, Apple, Gionee and Hero Cycles, among others have all bought airtime on Sony Pictures Networks, the official broadcaster of the tournament here. While the ad rate for a 10-second spot during the 2014 FIFA World Cup was between Rs 1.75 lakh - Rs 2 lakh, for the Euro this year it’s Rs 2.25 - Rs 2.5 lakh. Says Mehta, “Our association will be significantly amplified through digital and social media channels. The objectives will be to continue to drive awareness and raise positive affinity all leading to greater consideration for the brand. Also, this season’s broadcast in convenient time bands are an advertiser’s delight.”

However, what might not be a delight for marketers is the Euro’s mascot, Super Victor. This is how key sponsor Coca-Cola describes Super Victor in a post titled ‘10 fun facts about UEFA EURO 2016’: “He’s a little boy with an international name, whose cape and magic boots allow him to fly, be a football genius and spread football fever wherever he goes. Super Victor will be meeting and greeting fans up and down the country at #MascotteDay events, adding fun and communicating the values of the event: pride, sharing and respect.” Turns out Super Victor is also the name of a sex toy!
Comments
Add Your Comments
Commenting feature is disabled in your country/region.