Since the market was expecting a poor set of numbers for this quarter, it did not react negatively. Some sectors, though, belied Street expectations.

Another quarterly results season has ended with lacklustre numbers from India Inc. The aggregate net profit of 2,418 companies fell 8.63% in the first quarter of 2017-18, compared to the same period last year. Destocking prior to the implementation of the goods and services tax (GST) is the main reason behind the poor numbers. This was also reflected in the Index of Industrial Production (IIP) which fell 0.1% compared to June 2016—contracting for the first time in 48 months. Compared to May, IIP fell 1%.

However, since the market was expecting a poor set of numbers for this quarter, it did not react negatively. Some sectors, though, belied Street expectations. “Broadly, first quarter results have been in line with the overall estimates. While retail-focused private sector financial companies and cement firms delivered a positive surprise, pharmaceuticals fared weaker than was expected,” says Gopal Agrawal, CIO, Equity, Tata Mutual Fund.

WHAT THE FUTURE HOLDS
So, when will things improve? Market participants have begun asking this question more frequently because the market has already rallied expecting an early rebound in growth. GST implementation-related issues have spread to the second quarter as well. However, experts say that it is transitory in nature and investors don’t need to get worried. “Though data like Purchase Managers Index (PMI) has weakened significantly in July due to GST implementation-related issues, the impact should be transitory,” says Aayushi Kukreja, Economist, Morgan Stanley Research. Agrawal of Tata Mutual Fund concurs: “GST-related issues started getting sorted from around mid-July, so the negative impact will last only up to the first few weeks of the current quarter.”

Though the immediate issues will be solved soon, the lingering impact of the GST disruption will continue for some more time. This is why now the government is no longer confident of achieving the higher end of its GDP growth estimate—6.75-7.5%— for 2017-18, stated in the economic survey. “Some disruption in economic activity was expected on account of the new taxation regime and the economy would take some time to return back to full steam,” says Anis Chakravarty, Lead Economist, Deloitte. Phani Shekhar, Fund Manager, PMS, Karvy Capital agrees: “Don’t expect any significant improvement in corporate numbers in this financial year.”

Though the overall numbers are expected to remain weak, sectoral performance, just like the first quarter, will vary in the coming quarters as well. “Sectors such as telecom and banks will continue to struggle in the coming quarters too,” says Shekhar. The aggregate net profit of telecom services sector fell 395% due to the onslaught by Reliance Jio. The cut-throat competition in telecom is still continuing and it may take few more quarters before things settle down. Corporate-focused public sector financial firms such as SBI are still under pressure due to their ballooning non-performing assets (NPA). Since contribution from the financial segment to the market is big, overall earnings revival is not possible unless this sector gets out of the wood. “Two big exporting sectors, IT and pharma, are also not doing well now,” points out Shekhar. In addition to the growth worries in facing IT and pharma, the appreciating rupee is another factor that is hurting them.

Telecom sector drags down earnings
Growth is likely to stay muted in the second quarter as well. 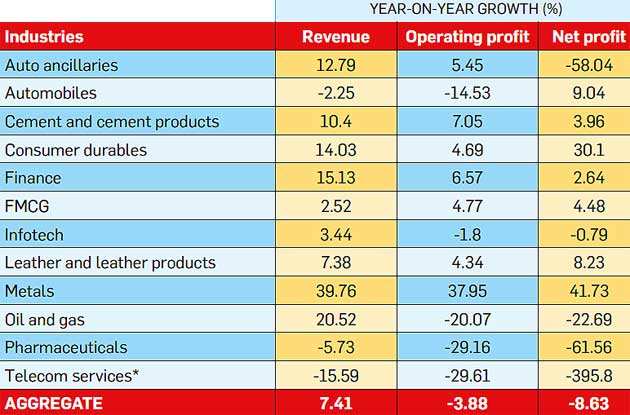 Based on 2,418 companies. Compiled by ETIG Database.*Net profit fall is more than 100% because the industry reported losses this quarter compared to profit for the same period last year.

Base metal is one segment that is expected to improve its performance in the coming quarters. “Base metals prices have started rising, so companies from these sectors may report good numbers in the second quarter,” says Agrawal. Base metals, especially the nonferrous metals like aluminium, nickel, copper, zinc, etc., have rallied in the recent past because of the production restriction imposed by China. A result of the crackdown for environmental violations, these restrictions have eliminated the surplus production from the market.

COMPANIES HOLD CAPEX
Sustained economic growth is possible only when the investment demand picks up and, for that, companies need to start investing in new plants. Experts believe that the pick-up in investment demand won’t happen anytime soon. “It will take at least one more year for the investment demand to pick up,” says Agrawal. Low capacity utilisation is the main reason why companies have been holding capital expenditure. They won’t set up new capacities till utilisation levels improve. “In addition to low capacity utilisation, nonavailability of credit is another issue,” says Shekhar. Though the banking system is flush with cash on account of the deposits in the wake of demonetisation, banks are not in a good shape to lend to large projects due to their NPA issues.

WHAT SHOULD INVESTORS DO?
Investors need to be careful because the market is holding out at higher levels, despite the weak corporate numbers. And valuation continues to be at elevated levels, despite the recent correction. While the Sensex PE (price-equity ratio) is placed at 23.48, Nifty is trading at a PE of 25.28. “Investors should stick to market leaders and not attempt bottom fishing,” says Shekhar.
Read more on
Mutual Funds
stock market
GST
corporate earnings
Index of Industrial Production

Panel to give feedback on new GST system

Comments
Add Your Comments
Commenting feature is disabled in your country/region.
IN THE SPOTLIGHT
Why you should get a Cancer Insurance

All About Tax Saving

More From All about tax-saving
Discover Mutual Funds