The trust, which has received registration approval from the Securities and Exchange Board of India (Sebi), is aiming to raise about $1 billion through the listing.

The trust, which has received registration approval from the Securities and Exchange Board of India (Sebi), is aiming to raise about $1 billion through the listing. As per Sebi REIT guidelines, Embassy Office Parks will have to divest a minimum 25% stake through the listing.

Embassy REIT will be India’s first REIT. Application for registration approval was filed last year and Sebi has now cleared it. The people cited earlier did not say how much the developer will divest. 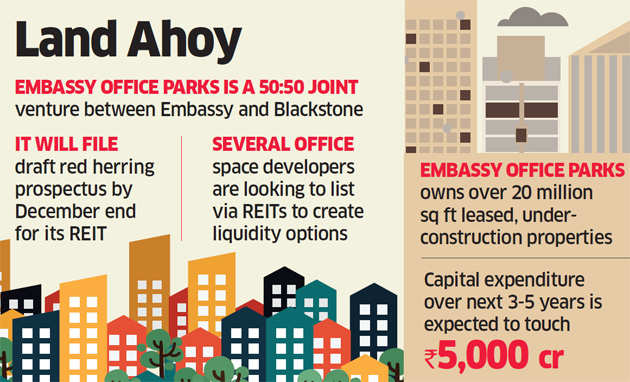 Bengaluru-headquartered Embassy Office Parks owns 20 million sq ft office space as leased and under-construction properties, of which 13 million sq ft is under construction. Its capital expenditure over the next three to five years is expected to touch Rs 5,000 crore.

Embassy Property Developments separately owns 5 million sq ft of office assets in Bengaluru and Chennai which is not included in the joint venture. It also has 11 million sq ft under construction in four projects in Hyderabad and Chennai.

“The company is carrying out a lot of legal work. There are a series of meetings scheduled this week,” said one of the persons cited earlier.

Sebi recently said that REITs are allowed to invest up to 20% in underconstruction assets. This will allow for more portfolios to be listed, which hitherto could not be considered as their under-construction portion was greater than 10%. The regulator has also allowed REITs to invest in a two-level special purpose vehicle (SPV) structure.
Planning to invest in stocks? Now, shortlist scrips at the click of a mouse with ETMarkets Stock Screener.
Read more on
REIT
Embassy Office Parks
Embassy Property Developments
reits
Blackstone Group
Sebi
real estate

Prestige Estate: Listing of REIT may lead to re-rating

Comments
Add Your Comments
Commenting feature is disabled in your country/region.
IN THE SPOTLIGHT
Why you should get a Cancer Insurance